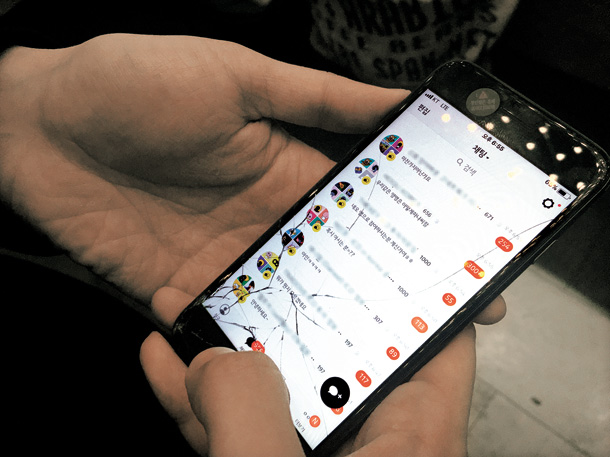 A cryptocurrency investor uses his mobile phone during an interview with the JoongAng Ilbo last Saturday. On the screen are the SNS chat groups he joined to get the latest news on cryptocurrencies from fellow investors. [OH WON-SEOK]

Korea’s cryptocurrency mania is largely fueled by young people in their 20s and 30s who sacrifice sleep and peace of mind to track their asset’s every movement, betting on a better future in Korea’s volatile and unregulated cryptocurrency market.

On Jan. 11, Justice Minister Park Sang-ki announced that the government may shut down cryptocurrency exchanges. Six days later, Finance Minister Kim Dong-yeon reaffirmed that closing exchanges was still on the table. These remarks weakened confidence in the cryptocurrency market, dragging Kim’s assets down to 55 million won.

When the JoongAng Ilbo met Kim last Saturday for an interview, Kim kept his eyes glued to the cracked screen of his mobile phone, checking for updates on currency fluctuation, prepared to take action if prices moved against him.

“I get 15,000 won for working two hours overtime at night,” he said. “That’s only enough to cover my transit fees. Do you think I can give up investing in cryptocurrencies when I can earn hundreds of thousands of won in a few minutes without doing anything?”

He added, “I can save 30 million won a year on my current salary if I’m being super frugal. That might barely allow me to purchase a small apartment in 20 years.”

Insecurity about the future is a big factor pushing young Koreans to dedicate their time to cryptocurrencies. Many despair that their futures are bleaker than their parents’, and that the opportunities to climb the social ladder through real estate investment and education are far fewer in number.

“The cryptocurrency market is a new investment market,” Kim said, “and it angers me when authorities regulate it just by mere speculation.”

“Though the government is trying to restrict cryptocurrency, the young generation wants salvation,” said a 25-year-old university student in Seoul surnamed Park, who began investing in cryptocurrencies last year.

One 32-year-old game developer began investing in cryptocurrencies after reading online that the price of Ethereum had jumped 8,400 percent last June. “I once earned 7 million won after investing 100,000 won,” he told the JoongAng Ilbo. “Once you have an experience like that, it’s not easy to pull out.”

Unlike the conventional stock market, the cryptocurrency market is open 24 hours a day without regulation. Thousands of different kinds of currencies exist, ranging from a few hundred won to tens of millions of won per coin.

Due to the sleepless nature of the cryptocurrency world, many young investors rely on online communities to instantly share the latest news about events that may influence market prices.

Students from Seoul National University and Korea University have created online communities to that end. Kakao Talk, Korea’s most popular messaging app, has various group chats where investors can exchange information. One JoongAng Ilbo reporter joined such a chat with 600 members. Hundreds of conversations piled up overnight, many of which contained market-specific slang. One message read, “[A new currency] better rise to the 32nd floor,” meaning an increase to 3,200 won.

As many cryptocurrency prices were hit hard in the past few days, investors cynically joked, “What’s the temperature of the Han River now [so I can go commit suicide]?”