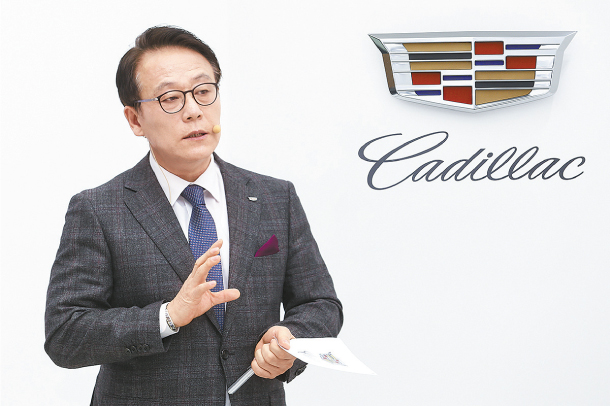 Cadillac Korea pledged to beef up its service network in 2018 after having a record-breaking year in 2017.

Cadillac Korea sold 2,008 units last year, the highest number since the American brand came into Korea in 1996 and 82 percent higher than the year before.

“It may be hard to expect the same amount of growth this year,” said Kim Young-sik, president of Cadillac Korea on Friday at its Samseong-dong showroom in a New Year’s speech.

“This year, Cadillac Korea will focus more on building internal stability such as setting up more showrooms and expanding the service network,” Kim added.

The company said it will expand its service network of 19 branches to more than 22 this year.

While customers sometimes had to use independent service centers not run by Cadillac Korea in the past, Kim promised that new branches will be operated directly by the Korean headquarters.

It promised that existing independent service centers will gradually be converted into directly operated branches.

The number of showrooms will be expanded from the current 16 to 19 this year.

Cadillac Korea forecast it will sell 2,500 units this year

It will introduce a new powertrain for its flagship SUV Escalade, which launched in Korea last May.

The highest trim of the Escalade - dubbed the Platinum - will also be launched in Korea by the latter half of this year.

Cadillac Korea is trying to appeal to a younger demographic with its “young American luxury” slogan.

It will reopen the Cadillac House Seoul, a cultural venue set up last year for the first time, to promote a softer, sophisticated image for Cadillac.

The pop-up store, which operated for two months last year, will be operated for a longer time, according to Cadillac Korea.

Its venue and schedule hasn’t been confirmed.

“This time, we will not only let visitors look around the venue, but will add test drives as well,” Kim said. “We are thinking about 24-hour test drives, which haven’t been attempted in Korea before.”

When asked whether Cadillac Korea will recall vehicles equipped with error-prone Takata airbags, Kim said, “Nothing has been decided since last year.”

“The recall procedure is decided by General Motors headquarters in the U.S.,” he added. “We haven’t heard anything from them yet.”