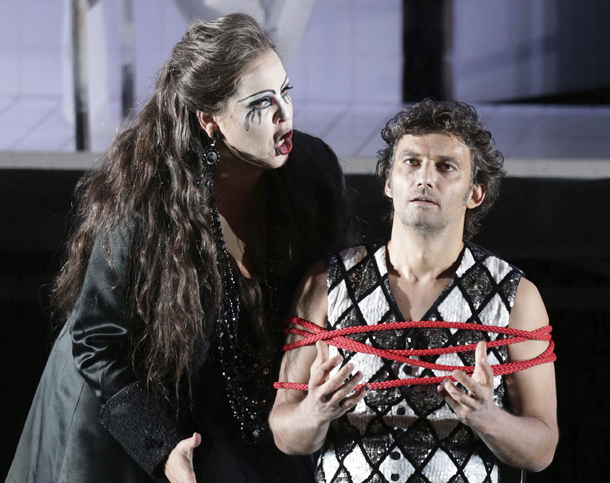 Jonas Kaufmann, right, in the role of Manrico and Elena Manistina as Azucena sing during a dress rehearsal for the opera “Il Trovatore” by Giuseppe Verdi in the Bavarian State Opera House in Munich, southern Germany. [AP/YONHAP]

NEW YORK - Jonas Kaufmann, the world’s most sought-after tenor, hopes his cancellations are in the past.

Back in the United States after a four-year absence caused mostly by illness but partly by a desire to spend more time with his children, the 48-year-old German with the clarion voice and heartthrob looks is giving recitals in California and New York this week and returns in April for performances in Boston and New York.

“I’m very happy and thankful that I have so enthusiastic fans that they would love to see me every day perform,” he explained during an interview this week.

He missed the Teatro Comunale of Bologna’s 2011 tour of Japan because of surgery to remove a lymph node from his chest, and a burst blood vessel on his vocal chords sidelined him from September 2016 until the following January.

Kaufmann withdrew from two performances of Bizet’s “Carmen” at the Metropolitan Opera in 2014-15 and an entire run of a new staging of Puccini’s “Manon Lescaut” there the following season because of illness.

Then he missed this season’s new production of Puccini’s “Tosca,” saying he needed to skip the rehearsal period and early performances to spend time at his home outside Munich with his 19-year-old daughter and younger teenage sons. The Met decided to replace him for the whole run, though he is scheduled to return next season for Puccini’s “La Fanciulla del West.”

“Even though my kids are getting bigger and bigger all the time, they still need me,” he said. “There are lots of things, school and private life, that they need to discuss or want to discuss with their father. So, you see, that’s the thing. And I could have said I need a sabbatical or whatever, that’s not the case. I just need to reschedule my daily life so that it somehow works for everyone, including the opera.”

With a burnished tone in the most demanding repertoire, Kaufmann received raves for his debuts in the title roles of Wagner’s “Parsifal” at the Met in 2013 and in Verdi’s “Otello” at London’s Royal Opera last summer.

This season, colds caused him to cancel appearances in Bucharest, Romania; Moscow; and Rome.

“If I would come back too early, I would probably ultimately ruin my instrument,” he said. “I think it’s best also for my fans if I protect my instrument in a way that I know exactly when to stop singing and to wait until it’s good enough and safe enough to start again.”

After studying at the University of Music and Performing Arts in Munich, he spent 1994-96 at the State Theatre in Saarbruecken, and debuts followed at the Salzburg Festival and La Scala (1999), The Royal Opera and Paris Opera (2004), and the Met and Vienna State Opera (2006).

He will be at Carnegie Hall on Saturday to repeat the Schubert program he sang in Santa Monica and will make his first public try at Wagner’s “Tristan und Isolde” in an uncut second act concert version at Boston and New York in April. His first staged performance is not for 3 and a half years.

Up ahead are more stagings of “Otello” and the French version of Verdi’s “Don Carlos.” He will sing an unusual tenor version of Strauss’ “Four Last Songs” in London this May - usually performed by a soprano - and plans to learn Wagner’s Tannhaeuser” and Korngold’s “Die Tote Stadt.”

The work comes even as he tries to maintain a private life. He separated from his wife, mezzo-soprano Margarete Joswig, four years ago and is partnered with opera director Christiane Lutz.

“There was a generation of singers that dedicated their lives, at least it seemed that would be the case, to the art and they couldn’t do anything but - they would never go to do sports, they would never go outside if the temperatures are too low,” he said. “They would forget what life is about, and if you don’t know that, you have nothing to tell on stage.”