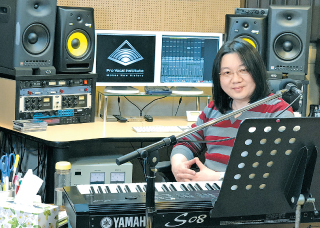 Jun Gi-young, the CEO of Pro Vocal Institute, a music academy specializing in vocal lessons, sits in his office in Gangnam, southern Seoul. His book “The Art of Vocal Training” is the first Korean book on applied music to be translated into Japanese and published by the Japanese music giant Yamaha. [PRO VOCAL INSTITUTE]

A Korean vocal coach who has trained top musicians, including K-pop girl group GFriend, will be the first Korean author to have a book on applied music published by the Japanese music giant Yamaha.

Jun Gi-young is the CEO of Pro Vocal Institute (PVI), a music academy specializing in vocal lessons in Gangnam, Seoul. In 2016, he released “The Art of Vocal Training,” which outlines various vocal techniques as well as guidelines to becoming an effective vocal trainer.

The value of Jun’s book didn’t go unnoticed by the Japanese music industry. Given the popularity of K-pop in Japan, many Japanese artists are keen to know the secret to Korea’s musical success, which has seen groups like Bangtan Boys (BTS) topping international music charts.

Predicting widespread domestic interest, Yamaha Music Media, a publishing company operated by the Japanese conglomerate Yamaha Corporation, grabbed the opportunity to release the Japanese translation of the “The Art of Vocal Training.” The translated copies, slated to be released on Jan. 26, can now be pre-ordered online on the Yamaha Music Media homepage and on Amazon.

“This is the first time that a Korean book on applied music is being published in Japan,” said Atsushi Katayama, an editor at Yamaha Music Media.

Jun’s qualifications as a vocal trainer are undeniable. In the late 1990s, he went to Hollywood to major in the vocal program at the Musicians Institute, an American college of contemporary music. His teacher was Seth Riggs, a renowned vocal coach who trained legends like Michael Jackson, Barbra Streisand, Stevie Wonder and Madonna, among others.

In 2007, Jun became the first Korean qualified to teach Speech Level Singing (SLS), a vocal technique created by Riggs. “The principle of the SLS method is to keep the larynx low like during speech and control the vocal cords to sing easily and comfortably,” Jun explained. “This method can prevent singers from straining their vocal cords from flawed singing habits or excessive performance schedules.”

Jun opened his vocal academy in 2009. The following year, he began gaining media attention after appearing as a vocal trainer in MBC’s “Birth of a Great Star,” a singing competition television series. Many musicians sought Jun’s expertise afterwards, including members of GFriend, Kim Jin-ho from SG Wannabe, Changmin from 2AM and Lee Ji-young from Big Mama. Among his other notable students were traditional Korean musician Lee Hee-mun and actress Han Hyo-joo.

“I hope this book becomes well-known in Japan,” Jun told the JoongAng Ilbo ahead of his book’s release there. “It can become the first step for Korean books on applied music to become sold en masse abroad.”