Singer will check out arrangements for North’s troupe

Singer will check out arrangements for North’s troupe 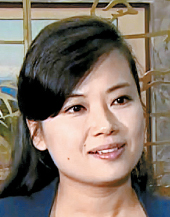 A delegation led by North Korean singer Hyon Song-wol, head of the well-known Moranbong Band, will be visiting Seoul and Gangneung Saturday and Sunday to check conditions for the North Korean artistes coming to the PyeongChang Olympics, said an insider at South Korea’s Ministry of Unification

“A message from Ri Son-gwon, chairman of North Korea’s Committee for the Peaceful Reunification of the Country, states, ‘A seven-person delegation led by Hyon Song-wol, head of the Samjiyon Orchestra, will be dispatched to the South on Saturday via the Gyeongui Line [a road that crosses the border near the west coast] to determine the logistics for the North Korean artistes. They will stay two days,’” said an official of the Unification Ministry. The Gyeongui Line is the route the North Korean athletes participating in the Olympics will use to enter the South.

Hyon and her delegation is expected to travel to Seoul and Gangneung, where the Samjiyon Orchestra concerts are scheduled to be held.

Pyongyang asked Seoul last Monday to allow 140 members of the so-called Samjiyon Orchestra to cross into the country to attend the Winter Olympics through the truce village of Panmunjom next month.

The name “Samjiyon Orchestra” has never appeared in North Korean media, although it has publicized a Samjiyon Band.

Hyon is leading the orchestra. She was also part of the North Korean delegation that met with the South’s delegation at the Tongilgak, a North Korea-controlled building in Panmunjom border on Monday. The meeting was the second round of inter-Korean dialogue after Jan. 9, when the two countries held the first high-level meeting in over two years to hammer out details of North Korea’s participation in the Winter Games.

Hyon was reported to have the highest political standing among the North Korean representatives in that meeting, which included Kwon Hyok-bong, director of the Arts and Performance Bureau in North Korea’s Culture Ministry; Kim Sun-ho, an official with the orchestra in charge of administrative tasks; and An Jong-ho, a stage manager.

Hyon is known as a feisty character. She was to lead the much better known Moranbong Band during a concert in Beijing in 2015, but canceled the concert three hours before it was to start because Beijing took issue with a scene that involved video footage of North Korean nuclear weapons.

“The supreme leader’s work cannot be edited,” she told her Beijing hosts at the time.

Hyon gained popularity as a singer in North Korea in the early 2000s and became head of the Moranbong Band during leader Kim Jong-un’s regime. She has been described in international media as an ex-girlfriend of Kim, though the South Korean government said it has “no evidence” for that assertion.

On Friday, South Korea’s Ministry of Foreign Affairs, Ministry of Unification, Ministry of National Defense and other ministries and the prime minister agreed that South Korea must utilize the North-South rapport built through the North’s participation in the Olympics to boost bilateral relations after the games.

“The ministries hereby promise to do all they can to ensure a successful PyeongChang Olympics with the participation of North Korea,” the ministries said in a report submitted to Prime Minister Lee Nak-yon.

“We will try our best to promote peace on the Korean Peninsula beyond the PyeongChang Olympics,” the report said.

“South Korea’s diplomatic efforts will be focused on encouraging U.S.-North Korea dialogue to follow the North-South dialogue,” said the ministry in its statement.

U.S. State Department spokesperson Heather Nauert in a press briefing on Tuesday in Washington welcomed the inter-Korean dialogue but said the United States is not looking to start a dialogue with the North at the moment.

“I think it’s pretty fresh that the Republic of Korea and also the DPRK are having conversations… without that maximum pressure campaign that so many countries have been involved with, North Korea would not be having talks with South Korea,” she said. “We don’t have any conversations that are ongoing with North Korea… Our policy hasn’t changed.”