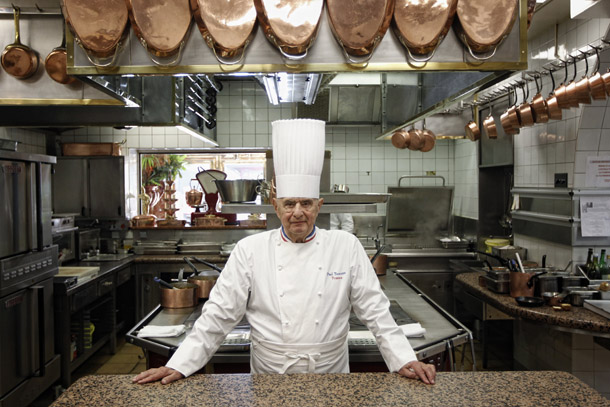 PARIS - Paul Bocuse, the master chef who defined French cuisine for more than a half-century and put it on tables around the world, has died. He was 91.

Often referred to as the “pope of French cuisine,’’ Bocuse was a tireless pioneer, the first chef to blend the art of cooking with savvy business tactics - branding his cuisine and his image to create an empire of restaurants around the globe.

Bocuse died Saturday at Collonges-au-Mont-d’or, the place where he was born and had his restaurant.

“French gastronomy loses a mythical figure,’’ French President Emmanuel Macron said. “The chefs cry in their kitchens, at the Elysee [presidential palace] and everywhere in France.’’

Bocuse, who underwent a triple heart bypass in 2005, had also been suffering from Parkinson’s disease.

Bocuse’s temple to French gastronomy, L’Auberge du Pont de Collonges, outside the city of Lyon in southeastern France, has held three stars - without interruption - since 1965 in the Michelin guide, the bible of gastronomes.

In 1982, Bocuse opened a restaurant in the France Pavilion in Walt Disney World’s Epcot Center in Orlando, Florida, headed by his son Jerome, also a chef. In recent years, Bocuse even dabbled in fast food with two outlets in his home base of Lyon.

“He has been a leader. He took the cook out of the kitchen,’’ celebrity French chef Alain Ducasse said at a 2013 gathering to honor Bocuse.

“Monsieur Paul,’’ as he was known, was placed right in the center of 2013 cover of the newsweekly Le Point that exemplified “The French Genius.’’ Shown in his trademark pose - arms folded over his crisp white apron, a tall chef’s hat, or “toque,’’ atop his head - he was winged by Marie Curie, Louis Pasteur and Coco Chanel, among other French luminaries.

While excelling in the business of cooking, Bocuse never flagged in his devotion to his first love, creating a top class, quintessentially French meal. He eschewed the fads and experiments that captivated many other top chefs.

“In cooking, there are those who are rap and those who are concerto,’’ he told the French newsmagazine L’Express before his 2005 biography, adding that he tended toward the concerto. AP