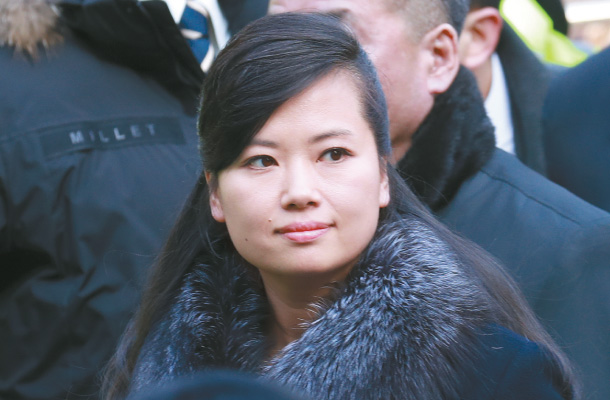 Hyon Song-wol, leader of North Korea’s Samjiyon Orchestra, arrives at Seoul Station on Sunday to board a KTX heading to Gangneung, Gangwon. The North Korean delegation led by Hyon traveled to the South to inspect several arts centers in Gangneung and Seoul, at two of which the orchestra is expected to perform before the 2018 PyeongChang Winter Olympic Games. [YONHAP]

A seven-member delegation from North Korea led by Hyon Song-wol, leader of the Samjiyon Orchestra, who once was rumored to be leader Kim Jong-un’s ex-girlfriend, crossed over the border Sunday morning to check local facilities for two orchestra concerts next month.

Hyon and her teammates took a road linking the two countries near the west coast, which was shut down after Seoul pulled out of the joint Kaesong Industrial Complex project in February 2016, and arrived in the South at around 9 a.m.

The delegation, guarded by local police and agents from the National Intelligence Service, traveled from South Korea’s Customs, Immigration and Quarantine (CIQ) office in Paju, Gyeonggi, to Seoul Station, central Seoul, in a limousine bus before taking a KTX bullet train to Gangneung, Gangwon.

Gangneung is one of three venues where the PyeongChang Olympics will be held, and one of the two cities where North Korea’s Samjiyon Orchestra will perform concerts next month to mark the Winter Games.

After looking around Gangneung Sunday, the delegation is expected to travel back to Seoul today to check out facilities in the capital, and then make its way back to the North.

Hyon, arriving in a long black winter coat, fur scarf and high heels with her hair half tied to the back, did not make any public remarks to the local media, as a throng of reporters shadowed her from the Hwang Young-cho Gymnasium in Gangneung Myeongnyun High School to the Gangneung Arts Center, which are two strong candidates for the orchestra concert in Gangneung.

Her visit to South Korea was only confirmed at the last minute.

Pyongyang initially faxed a letter to Seoul on Friday morning through a recently restored hotline in the truce village of Panmunjom, saying it would send a seven-member delegation led by Hyon to South Korea on Saturday and Sunday.

After consultations with Seoul throughout the afternoon, both sides agreed that the North Koreans would cross over the border through the west coast on Saturday morning.

In working-level talks last week, both Koreas agreed that the North will send 140 members of the Samjiyon Orchestra to South Korea next month to perform once in both Seoul and Gangneung.

The group hasn’t appeared in North Korean media before, leaving local government officials and experts wondering whether it’s a makeshift orchestra specially formed for the visit.

There is a Samjiyon Band in the North, but Pyongyang did not elaborate whether that or the well-known Moranbong Band, a favorite of Kim Jong-un, would be included in the Samjiyon Orchestra, according to South Korea’s Unification Ministry, which handles inter-Korean affairs.

South Korea’s own group of 12 inspectors, led by Lee Joo-tae, director general of the Unification Ministry’s Inter-Korean Exchange and Cooperation Bureau, will cross into North Korea next Tuesday, staying until Thursday to check facilities at the Mount Kumgang resort and Masikryong Ski Resort.

Pyongyang agreed Sunday for the South Korean group to travel to the North by taking a road connecting the two countries along the east coast, which has been scarcely used since 2008, following Seoul’s tour ban to Mount Kumgang after a 53-year-old South Korean tourist was shot by a North Korean guard.

The two Koreas agreed last week to hold a day-long joint cultural event at Mount Kumgang late this month or in early February, possibly including a musical performance or poem recital. It will likely be participated in by figures from the local culture, sports and religious sectors and civic groups.

On Seoul’s request, the two countries also agreed that South Korean ski athletes will travel to the Masikryong Ski Resort in the coming days to train together with their North Korean counterparts.

The agreement sparked ire from South Korean conservatives because the ski resort, which opened in 2014 on the hopes it would attract foreign tourists and earn foreign currency for the cash-strapped regime, is known to be a major pet project of North Korean leader Kim Jong-un.

North Korea told the South Sunday that it would like to send another delegation of eight inspectors from Thursday to Saturday, led by Yun Yong-bok, a deputy director at the North’s Physical Culture and Sports Ministry, to check local facilities for its athletes, cheerleaders and reporters. The North asked that it cross the border by taking the road along the west coast, and check local accommodations, stadiums and Olympic press centers. Seoul agreed Sunday evening.