Pyongyang will send athletes to ski and skate at Olympics

Pyongyang will send athletes to ski and skate at Olympics 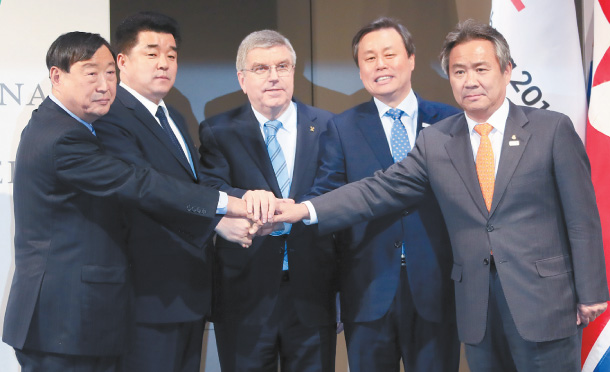 The International Olympic Committee (IOC) announced Saturday that 22 North Korean athletes will be competing in three sports and five disciplines at the upcoming PyeongChang Winter Games, promising a “door to a brighter future on the Korean Peninsula” as the international society struggles to tame the pugnacious regime with a burgeoning nuclear program.

The decision came after South and North Korean officials gathered at the IOC headquarters in Lausanne, Switzerland, to hammer out the details of North Korea’s participation in the Olympics with IOC President Thomas Bach. The Winter Games will kick off on Feb. 9 in South Korea’s northeastern Gangwon province.

During the opening ceremony on Feb. 9, North and South Korea will march under the “Korean Unification Flag,” also known as the Korean Peninsula flag, which is a white flag with a blue silhouette of the peninsula in the middle. One athlete from each country will be the flag bearers.

Athletes from both countries will wear a special uniform featuring a blue Korean Peninsula, and the acronym for the team will be “COR,” based on the French name for the nations, Coree.

A unified women’s ice hockey team will be formed, making it the first time that the two Koreas will ever form a combined team for the Olympics. Twelve North Korean players will be added to the South’s existing Olympic squad of 23 players. With respect to fair play, only 22 players will be entitled to play in each game.

The team will be led by South Korea’s head coach, who will select at least three players from the North for each match. The team will compete as “Korea” and use the acronym “COR,” with the anthem being the Korean folk song “Arirang.”

In all other sports, North Korean athletes will compete for the North in their respective uniforms.

Figure skating pair Ryom Tae-ok and Kim Ju-sik, who were the only North Korean athletes who qualified for the Winter Games, but missed the deadline of registration last October, will be permitted to play.

Jong Kwang-bom and Choe Un-song, both men, will compete in short track speed skating, in the 1,500 meters and 500 meters, respectively.

In alpine skiing, two men - Choe Myong-gwang and Kang Song-il - and one woman, Kim Ryon-hyang, will compete in both the Giant Slalom and Slalom events.

“The Olympic spirit is about respect, dialogue and understanding,” said IOC President Bach. “The Olympic Winter Games PyeongChang 2018 are hopefully opening the door to a brighter future on the Korean Peninsula, and inviting the world to join in a celebration of hope.”

Bach continued that the Olympic message of respect and understanding will “go from PyeongChang to the world.”

South Korea’s ruling Democratic Party welcomed the Olympic declaration in a statement Sunday, saying both countries would need to use it as an opportunity to realize the Olympic spirit of peace and reconciliation.

The main opposition Liberty Korea Party, on the other hand, denounced the Moon Jae-in administration for yielding the PyeongChang Olympics to North Korea in making it a “Pyongyang Olympics,” adding that the Kim Jong-un regime would take advantage of its participation in the Games as a propaganda tool.