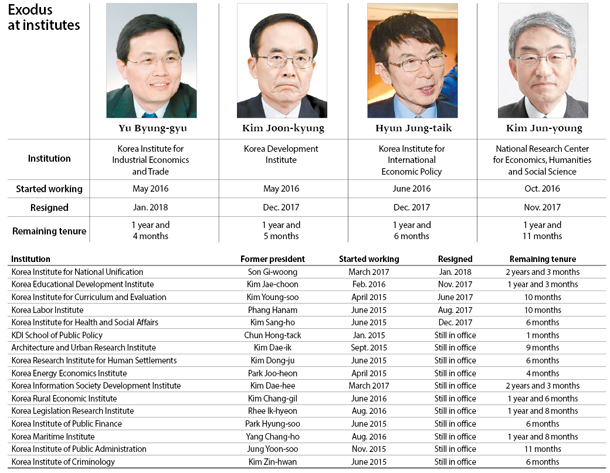 On Friday, Yu Byung-gyu, president of the Korea Institute for Industrial Economics and Trade (KIET), held a ceremony in which he officially resigned. Yu had nearly a year and a half left in his term.

He said he was leaving because he had finished his work and wished the institute well under new leadership.

While Yu’s departure seemed voluntary, it was anything but.

Yu is a scholar who started his career at the Hyundai Research Institute, where he took charge of the market analysis and the economic research department. In 2013, Yu became the first head of the National Economic Advisory Council in the Park Geun-hye administration. In 2016, he became the first person from the private sector to be appointed president of the government-owned KIET.

“My understanding is since the Moon Jae-in administration took office in May, there has been pressure several times for Yu to resign,” said a high-ranking official within the institute.

Yu himself told close aides of his intention to step down since late last year.

Yu was not the only high-level appointee to feel the push from on high. A number of heads of state-run research institutes have been turning in their resignations with more than a year left in their terms. All were appointed by the previous administration.

In November, Kim Jae-choon resigned as president of the Korea Education Development Institute (KEDI). He was known to be at the center of the Park administration’s education policies. Kim, a former education professor at Yeungnam University, worked on the former president’s campaign committee as well as on her transition team. He was named President Park’s education secretary at the Blue House in March 2013 and moved to the education institute in 2016.

Also in November, Kim Jun-young resigned as head of the National Research Center for Economics, Humanities and Social Science (NRC) with almost two years left in his term.

His resignation came as a particular surprise as he showed such willingness to strengthen the role of the state-run think tank in managing the overall research done by other state-run institutions.

Kim, as a former Sungkyunkwan University president, was known for being a very unpolitical person. Yet even Kim stepped down - to surrender the immense influence his position wielded.

There are 26 institutes funded by the government and the NRC acts as their command center. The president of the NRC has the power to appoint the heads of these institutes as well as manage the direction of their research.

“In order to change the heads of the institutes under the NRC, [the new government] needs an NRC president that aligns with its beliefs,” said a professor, who commented under anonymity.

In fact, after Kim resigned, the resignations of heads of state-run institutes only gained momentum.

On Dec. 26, Kim Joon-kyung, president of the Korea Development Institute (KDI), resigned with one year left on his contract. That morning, Kim posted his intention to leave the KDI on the institute’s internal online message board and held a ceremony later that afternoon.

Kim, who was vice president of the KDI between 2006 and 2007, was a Blue House economics aide during the Lee Myung-bak administration and became head of the institute in June 2013. He succeeded in extending his tenure in 2016.

Two days after Kim Joon-kyung’s resignation, Korea Institute for International Economic Policy (KIEP) President Hyun Jung-taik resigned with a year and a half left on his contract.

Hyun, a former Finance and Economy Ministry official, was a senior policy aide at the Blue House during the Park Geun-hye administration.

Since the Moon government began in May, one third or nine presidents of 27 institutions including the NRC have left before their terms ended.

Seong was a former Blue House aide of President Roh Moo-hyun. He was also a member of a think tank working for Moon during the presidential election last year.

A new NRC president will be appointed by the prime minister and the final decision is expected to be made within this month.

Once the new NRC president is selected, the overhauling of the heads of state-funded research institutes is expected to gain more speed.

There are already rumors about changing the presidents of the Kora Information Society Development Institute (Kisdi) and the Korea Energy Economics Institute (KEEI).

There are mixed views about turnover at the top of these institutes with changes of governments. Some see it as justifiable, while others condemn it as overly ideological.

“When the government changes, the direction of research at institutions that receive government funding has to change as well,” said a KDI researcher. “The new government is talking about income-led growth and the state-run institutes can’t just blankly say the government is wrong or talking nonsense.”

But some see a constant erosion of the independence of research institutes.

“The state-run institutes are strongly linked to the country’s future and their research has to be done strictly under a scholar’s conscience and scholastic judgement,” said another researcher who asked not to be named. “We’re not supposed to be institutions that pour out information that only backs specific policies or ideologies.”

A former head of one such institute who left before his term expired after a change in government shared his experience.

“There wasn’t direct pressure from the upper echelon but the people around me kept asking if I should quit,” said the former public institution head. “The real problem is that there is a shared view spread throughout society that the head of every institution has to change once the administration changes.”

Some say the legal tenure should be dispensed with if the heads of these institutions are forced to leave before fulfilling their terms.

“There is a need to apply different tenures depending on the position and character of the institution,” said Moon Myung-jae, a Yonsei University professor of public administration. “If the institution needs to align itself with the government, then the president’s tenure shouldn’t be tied to a given year. But if it needs independence from the government, tenure should be guaranteed so that person can do his job without having to worry about a changing government.”