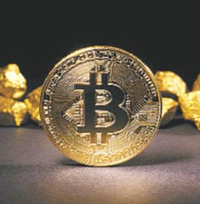 Korea is swept up in a frenzy over bitcoin. The fever for cryptocurrencies and their underlying blockchain technology is a global trend, but for Koreans in their 20s and 30s, the question of whether to engage in blockchain is of less importance.

The young have put their money in bitcoin because it is their only hope. They say the market has given them a chance to get into the middle class in a country where decent-paying jobs are scarce and buying a home through savings is nearly impossible. Youth unemployment is at an all-time high — 9.9 percent as of December — and that been partly behind the cryptocurrency craze among 20-somethings.

People can imagine a decent life when they have decent jobs. Those who have finished university with student loans find themselves saddled with debt and without a job. Over the last year, 253,000 jobs have been created in Korea, compared with two million in the United States. American companies are paying employees more out of fear of losing them due to competitively active hiring.

Trump has threatened American and foreign companies, saying they won’t be able to sustain competitive business unless they create jobs for Americans. Samsung and LG Electronics have built factories in the United States. Apple — notorious for its offshoring to save on taxes and labor — brought home $245 billion and vowed to create 20,000 jobs in the United States.

Tax cuts have been Trump’s signature economic agenda. In Korea, President Moon Jae-in has made minimum wage and income growth the keystone of his economic policies. The market, however, is responding in the opposite direction. Companies are closing their doors and shedding employees.

The minimum wage, which was at 5,210 won ($4.90) in 2014, snowballed to 7,530 won this year. The 44.5 percent jump in just four years is unprecedented across the world. Not many small businesses can afford the rapid growth in labor costs.

The government has set aside 3 trillion won in taxpayer money to help small businesses cover the sudden spike in wages. An employee of a snack bar complained to President Moon’s policy chief, Jang Ha-sung, about what use higher wages would be for him if business was poor. The employee knew better about our economic reality than the president’s chief policy maker.

Workers are comfortable with a higher paycheck when their employers do well. The employer and employee are in the business together, whether it is a mom-and-pop store or a big company. The economy is closely interconnected.

There are many workplaces that cannot receive government aid. Those employers will inevitably have to lay off staff. Greasy spoons like snack bars and fried chicken joints where low-wage workers usually hang out will also go out of business.

An economy does not run simply by re-appropriating the share of a single pie. The government must come up with market-friendly measures to create jobs. That’s the only way to lure the young away from the frenzied chase after cryptocurrency jackpots.