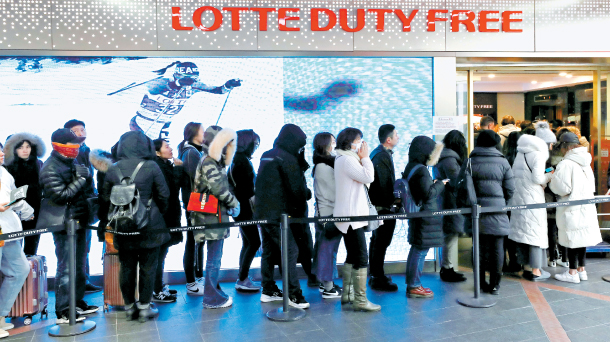 Tourists line up early Tuesday outside the Lotte Duty Free store in Sogong-dong, central Seoul. The Korea Duty Free Shops Association said sales from foreign shoppers at Korean duty-free stores reached a new record in December, despite a sharp drop in the number of tourists following a boycott from China over a U.S. missile defense system on Korean soil. Foreigners contributed to $939 million in sales last month, up 28 percent from a year earlier. The figure is an increase from the previous high of $938 million set in November. The number of foreign visitors to duty-free shops, though, plunged 11.3 percent year on year to 1.4 million last month, mainly due to China’s continued ban on group tours to Korea. The number of Chinese people who visited Korea last year was just over 4 million, down from 8 million the previous year, according to government data. Industry analysts attribute the latest increase in duty-free sales to individuals buying for resale or on other’s behalf. [YONHAP]