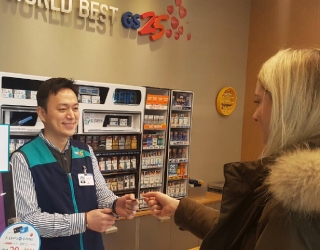 A customer pays with foreign currency at a GS25 on Tuesday. [GS RETAIL]

GS25 will begin accepting payment in foreign currency at all its convenience stores in Korea next month ahead of the PyeongChang Winter Olympics.

Starting Feb. 5, customers will be able to pay for purchases at GS25 with euros, yen, yuan and U.S. dollars. Exchange rates will be based on daily rates from Shinhan Bank and include commission.

A spokesman for GS25 said it implemented the system in anticipation of the influx of foreigners visiting Korea for the Winter Olympics next month, though it plans to continue the service after the Games end.

“The company expects the number of foreign visitors to Korea to increase in the future,” the spokesman said. “In order to make the service more convenient, GS Retail is continuing to develop differentiated services. If such effort continues, we are confident that foreigners to Korea will first think of GS25 when they want to go to a convenience store.”

GS25 is testing the service at two stores in Yeoksam-dong, southern Seoul, before expanding it nationwide on Feb. 5.

For store owners and part-time workers who are unfamiliar with foreign currency, GS25 will provide a touchscreen at the cash register with pictures of each currency.

GS25 has catered to foreign customers in the past by implementing a tax refund system, where visitors can make purchases with the tax deducted by scanning their passports.