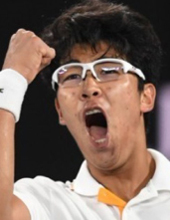 “Are you watching?” 22-year-old tennis player Chung Hyeon, ranked at 58, wrote on the camera lens after he defeated 31-year-old Novak Djokovic, winner of 12 major titles, in the round of 16 at the Australian Open on Jan. 22. For the first time in Korea’s tennis history, a player advanced to the semifinals of a Grand Slam tournament. Chung said that it was for his former coach.

But I read it as a warning message to the Moon Jae-in administration and its supporters, who do not understand what sports is all about and demanded a sacrifice from the women’s ice hockey team for the PyeongChang Olympics.

Two years ago, Chung was defeated by Djokovic, then ranked first, at the first round of the Australian Open zero to three. Chung has improved while Djokovic is still struggling with an elbow injury. But considering their rankings, Chung’s win is a near miracle. Chung is not what Prime Minister Lee Nak-yeon would describe as “a medal hopeful,” but his win is remarkable.

After the win, Chung said that he could come this far by copying his childhood idol, Djokovic. Djokovic said he didn’t want to talk about his injury because he respected Chung. Sports fans around the world praised the confidence of the low-ranked young player challenging his idol and the great sportsmanship of Djokovic.

Korean social media buzzed with postings about the win. Some wrote in reference to the PyeongChang Olympics’ joint team for women’s ice hockey, “Chung’s win blew off the stress of the joint team,” and “Making it to the quarterfinal is overwhelming enough, so don’t make fun of the dream of participating in the Olympics.” From the surprise win in tennis, an unpopular sport in Korea, they seem to be reminded of the women’s hockey team members that some view as victims of an unfair decision right before the Olympics.

The government is advocating peace, but some think that the sacrifice of the unpopular sports, especially the female players, was taken for granted to create a politically favorable scene. President Moon said that it would be a moving moment. But the Korean team has been given the special benefit of having more members in the roster, so the members may feel “angry for losing and uncomfortable for winning.”

The government and some ruling party members said that the Korean ice hockey team was not a medal-hopeful, and the joint team would cast new light on the unpopular sports. In fact, the Korean team wouldn’t have been able to compete if Korea wasn’t hosting the Olympic Games. But Chung’s surprise win says, “Are you watching? This is sports.”