Abe coming to Games, plans to tell Moon off on sex slaves

Abe coming to Games, plans to tell Moon off on sex slaves 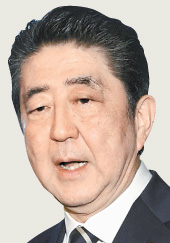 Japanese Prime Minister Shinzo Abe said Wednesday he would attend the opening ceremony of Korea’s Winter Olympics next month, despite a diplomatic row over the Japanese military’s wartime sexual enslavement of Korean women.

“The Tokyo Olympics will take place in 2020,” Abe said during a meeting with reporters in his residence. “I want to cheer up the Japanese athletes by attending the opening ceremony of the PyeongChang Winter Olympic Games, as it is also being hosted in Asia.”

Abe made clear that his trip to Korea will include a confrontation with President Moon Jae-in, who recently said a 2015 bilateral agreement to settle the sexual slavery issue was flawed and insufficient.

“During the summit, I want to firmly convey Japan’s stance on the agreement over the ‘comfort women’ issue,” he said, using a euphemism for the thousands of girls and women forced to work in military brothels.

In 2015, Korea and Japan struck a deal that included a Japanese government apology and a multimillion-dollar fund for the comfort women victims. The two countries also agreed that the settlement was “final and irreversible” as long as Japan faithfully followed through with its promises.

After reviewing the 2015 agreement struck between Abe and Moon’s predecessor Park Geun-hye, Moon said earlier this month that the deal is highly flawed and failed to reflect the victims’ needs. Seoul said it will return the 1 billion yen ($8.86 million) donation to Tokyo and Moon urged Japan to take additional measures to offer a true apology to the victims.

Abe has publicly rejected Moon’s request. He said earlier this month that the agreement is a promise between the two nations and keeping it is an “international and universal principle.”

In an interview with Sankei Shimbun published Wednesday, he said he would attend the PyeongChang Olympics and tell Moon directly that he cannot accept Korea’s demands for additional measures.

In the interview, Abe also said he will “definitely make a strong demand” to remove a statue representing the “comfort women” in front of the Japanese Embassy in Seoul.

“Without directly and clearly conveying Japan’s position, we cannot change their thinking,” Abe said. “It is better to hold a summit as soon as possible, rather than having a phone talk.”

In the interview, he also dismissed Moon’s plan to use the PyeongChang Winter Olympics as an opportunity to promote dialogue with North Korea. “An Olympics is just an Olympics. We must think about it separately [from other issues],” Abe said. “The policy of putting maximum pressure on the North must never be shaken. I want to clearly tell Moon this.”

In a meeting with reporters Wednesday, Abe also said he wants to tell Moon about the need for trilateral cooperation among Korea, Japan and the United States to counter the North’s threats.

As a result of Moon’s campaign to invite North Korea to the Olympics and to promote peace, the two Koreas resumed inter-Korean talks and agreed to march together during the Games’ opening and closing ceremonies and field a joint team. Concerns have been rising in Japan and the United States and among conservatives in Korea that Pyongyang was trying to drive a wedge in the trilateral alliance.

The Sankei Shimbun also reported Wednesday that the White House urged Abe to go to the Games in Korea, quoting a senior Japanese government official. It said Washington appeared to have chosen Abe as its partner to stop Seoul from being overly obsessed with inter-Korean talks. The United States has urged its two Asian allies to improve their relations. “Our role has been simply to encourage them to deal with the issue, to not let that issue stand in the way of the greater security threats that are common to all of us,” U.S. Secretary of State Rex Tillerson told reporters last week after a 20-nation ministerial meeting on North Korea in Vancouver, Canada.