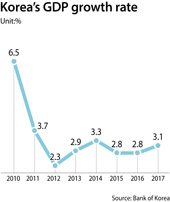 Annual economic growth in 2017 reached 3.1 percent, breaking the 3 percent threshold for the first time in three years thanks to robust exports.

But the fourth quarter saw a contraction, according to the Bank of Korea on Thursday, as a combination of declining automobile exports and construction investment - and fewer workdays - outpaced steady consumer spending and a stellar performance by semiconductor exporters.

The economy dipped 0.2 percent between October and December compared to the previous quarter. The central bank and analysts noted that the negative quarterly result, the first in nine years, would not divert Korea from its current course of moderate economic growth because the fourth quarter experienced multiple one-time factors.

“The long Chuseok holiday in October resulted in the rise of advanced orders in the services sector, which led to a strong third quarter,” said Chung Kyu-il, director general of the economic statistics department.

The main culprits of the weak fourth quarter were lower exports and an exceptionally good third quarter, analysts said.

“[The export decline] was mainly due to the different timing of Korea’s Chuseok holiday, which fell in October 2017 and distorted the trade numbers across the third and fourth quarters,” said a report co-authored by Morgan Stanley economists Deyi Ten and Jin Choi.

Exports shrank 5.4 percent compared to the previous quarter due to lower shipments of cars, which offset a rise in those of semiconductors.

“The third quarter posted quarterly growth of 1.5 percent, and that generated a negative base effect,” said Lee Sang-je, an economist at Eugene Investment & Securities.

Analysts held onto their projections of above 3 percent economic growth for 2018 on optimistic prospects for global trade.