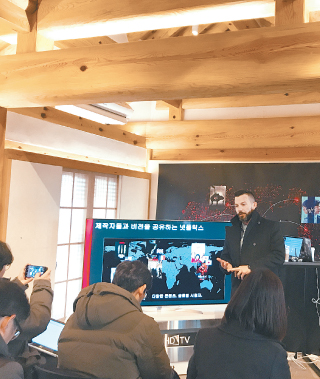 Rob Roy, vice president of content acquisition at Netflix, speaks to Korean reporters at the company’s New Year’s event in the Arumjigi Building in central Seoul on Thursday. He noted that Korea has a lot of quality content that the company hopes will be discovered by more viewers around the world. He named “Okja,” a blockbuster film by director Bong Joon-ho, and the “Forest of Secrets” television series as examples. The video streaming giant plans to invest $8 billion on content this year. [SEO JI-EUN]