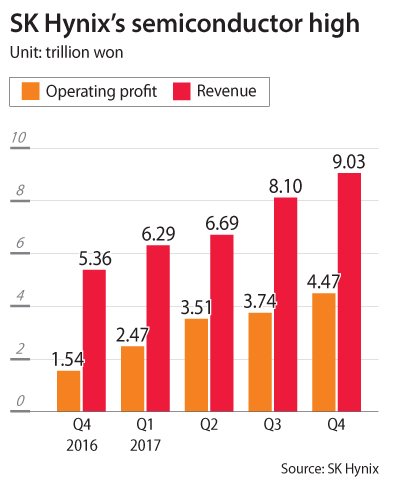 Operating profit shot up 191 percent year on year to 4.47 trillion won ($4.22 billion) and revenue soared 69 percent to 9.03 trillion won in the fourth quarter, fueled by hot demand for memory products, which is called in the industry a “semiconductor supercycle.”

When it comes to the full year, operating profit rose 319 percent to 13.72 trillion won and revenue totaled 30.11 trillion won, up 75 percent year on year.

The results for all of 2017 surpassed an analysts’ consensus compiled by financial information provider FnGuide of 13.56 trillion won in operating profit and 30.08 trillion won in revenue.

The company’s operating profit margin rose 27 percentage points over the previous year to reach 46 percent in 2017.

“Overall memory demand, particularly for server products, rapidly increased due to the worldwide growth of internet data centers, while technology migration challenges and higher capital expenditures for manufacturers have limited the growth of overall memory supply,” said the company in a statement.

Demand for DRAM products has been growing and DRAMs used in internet data centers are expected to surpass 50 percent for the entire segment this year, an SK Hynix marketing executive said.

DRAMs used in servers are expectged to make up nearly 30 percent of all DRAM sales this year.

All DRAMs - including for desktop computers, laptops and smartphones - saw prices rise 9 percent in the fourth quarter from the previous quarter.

SK Hynix is the world’s second-largest player in DRAM chips with a market share of 28 percent, trailing Samsung Electronics’ 45 percent as of the fourth quarter.

The chipmaker also sees rosy prospects this year for NAND Flash, a non-volatile storage chip that does not require power to retain data, which are cheaper than DRAMs.

SK Hynix is the fifth-largest NAND producer with less than 10 percent market share but is trying to climb the ladder. NAND Flash chips are considered cash cow products for manufacturers.

As traditional hard disk drives are being replaced by lighter-weight solid-state drives that do not require moving components in computers and servers, demand for 3-D NAND flash chips, the most advanced form, has been rising accordingly.

3-D NAND flash chips, which boast higher capacities in smaller physical spaces than the 2-D predecessors, already made up more than half of NAND sales by SK Hynix as of the fourth quarter.

SK Hynix vowed on a conference call to increase production of the fourth-generation 72-layer 3-D NAND, the latest product, to above 50 percent of all 3-D NAND production in the latter half of this year to catch up with Samsung and Toshiba.

SK started making the 72-layer 3-D NAND last April. SK Group’s chip-making arm plans to advance completion of its M15 NAND factory in Cheongju, North Chungcheong, by up to three months from a previous target of the end of this year.