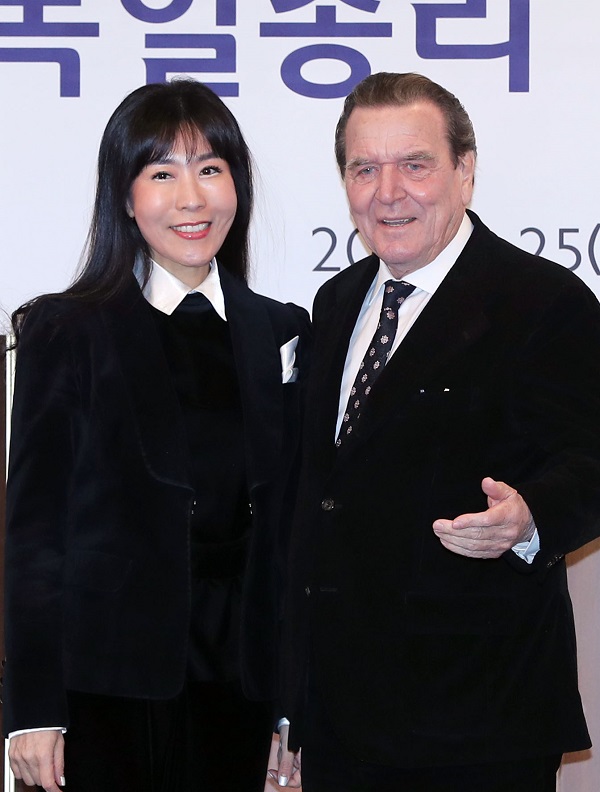 Schröder and Kim held a press conference arm-in-arm at the Korea Press Center in central Seoul and told reporters that they have already met with both families and received their blessings. They are planning a fall wedding, but the exact date and venue have not yet been decided.

“We plan to travel between Korea and Germany,” Schröder said. “I’ve held interest in Korea’s rich culture and history, and culture and arts, but I think there are many things I do not know yet, and there aren’t many places in Seoul that I have been to, so I hope to have more opportunity to visit Korea’s various historic sites and see and learn about how people live.”

Schröder served as the German chancellor over two terms between 1998 and 2005 and is a member of the Social Democratic Party, which he headed from 1999 to 2004.

He first met Kim at an international business conference two years ago.
News of their relationship spread after Schröder visited Korea last September to promote the Korean language version of his autobiography, “Entscheidungen: Mein Leben in der Politik (Decisions: My Life in Politics),” which Kim had helped to translate.
In the preface to the book, Shroeder praised her lavishly, writing, “Kim So-yeon, who translated this book, was a great help to me in understanding Korean sentiments and culture and is an honorary ambassador of Korea.”

On Jan. 17, German magazine Bunte published an interview titled “Ja, es ist Liebe! (Yes, This is Love)” and a photo featuring the couple on its cover.

JoongAng Ilbo photographer Kwon Hyuk-jae also released a series of black-and-white photos on Jan. 18 of the couple on a date walking the streets in Seoul, visiting Changdeok Palace and dining together.

Schröder has been married four times before.
Schröder said on his divorce from his fourth wife that they are currently undergoing a lawsuit and that it is the product of “several years of separation.” He and Doris Schröder-Köpf announced their separation after some 18 years in 2015.

He also emphasized that his divorce was a separate matter from his relationship with Kim.
Kim is a Seoul representative of the Economic Development Agency of the German state of North Rhine-Westphalia. Kim also has a daughter from a previous marriage. She is a graduate of Germany’s University of Marburg and has worked as a Korean translator as well as an interpreter for Schröder.

She is also planning on obtaining a doctorate degree in Korea-German economic relations.
Kim described the former chancellor’s Korean skills as limited to “saranghaeyo (I love you),” adding, “at least he can say the most important word in Korean.”