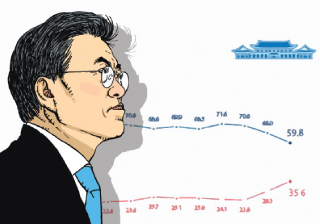 There is no reason to make a fuss. Many domestic opinion polls rely on automated response systems and samples and can produce dubious results. Also, compared to other presidents, President Moon is still far more popular. Gallup Korea’s quarterly approval rating data show that former President Lee Myung-bak’s approval rating never went above 60 percent in his five years. Impeached President Park Geun-hye supposedly had die-hard fans, and former President Roh Moo-hyun had passionate supporters, but their approval ratings each went over 60 percent only once.

But the speed is the problem. In the recent two months, President Moon’s approval rating suddenly fell by about 15 percent. Some say that it is reminiscent of former President Kim Young-sam. In the first year of his term, his approval rating was an impressive 83 percent until the third quarter. But when he reversed his election promises and decided to open the rice market, the rating fell to 59 percent. President Moon is entering his fourth quarter now.

The reasons for the decline are easy to find. In the course of forming a joint women’s ice hockey team, some argue that justice and fairness, the trademarks of the current administration, may have been shaken. Some found that their hopes for a confident and dignified nation were disappointed by the diplomacy with China and North Korea.

Prospect for a rebound is not likely to be easy. Former President Kim Dae-jung successfully regained popularity with the inter-Korean summit meeting in 2000. However, meeting with Kim Jong-un won’t be easy, and even if it happens, there could be backlash.

A Blue House insider said on Jan. 25 that the administration humbly embraces the public sentiment. It may sound cliché, but it is the right answer. The current administration was established because Park Geun-hye was impeached. The administration champions direct democracy and communicating with supporters.

And they are taken aback as young people in their 20s and 30s grew tired of old progressivism. The opposition is pathetic now, but the administration might not be able to regain popularity. From now, President Moon should display his true competency.

*The author is the deputy political news editor of the JoongAng Ilbo.