Choi Jae-woo has his eyes on gold

Choi Jae-woo has his eyes on gold 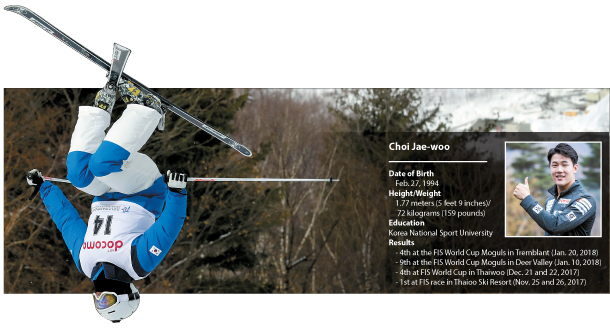 Ever since Toby Dawson started coaching for the Korean national mogul ski team, he has seen Choi Jae-woo as Korea’s rising star in mogul skiing.

Dawson, born in Busan, was adopted by married ski instructors from Colorado at age three. He competed in the 2006 Turin Winter Olympics and won the bronze medal in men’s moguls. Having regularly made trips to Korea hoping to find his birth parents, Dawson was appointed the head coach of the Korean national mogul ski team in 2011.

Mogul skiing is a freestyle discipline where skiers ski on a steep mogul course, performing technical turns and aerial maneuvers as they race down the course.

When Choi first started competing while he was an elementary school student, he won the majority of the competitions that he entered in Korea. Having moved to Canada in seventh grade, Choi got better over the course of four years, and an associate at the Canada Freestyle Ski Association once suggested to Choi to naturalize.

In 2015, at age 15, Choi became the youngest skier to be selected to join the Korean national team. Despite Choi’s success early in his career, over the past four years, Choi’s results at international competitions have been up and down.

“When I look back at when I skied the best and when I enjoyed skiing the most, it was in 11th grade, where I finished third at the FIS Junior World Ski Championships,” Choi said on Thursday. “At the time, I didn’t have any pressure about the result or a sense of rivalry. I didn’t try to impress anyone. I just liked skiing.”

He got off to a great start by finishing 12th at the 2014 Sochi Olympics, the best finish ever by a Korean skier. Then, the following year, Choi finished fourth at the 2015 International Ski Federation (FIS) World Cup Moguls at Deer Valley in the United States.

Based on his results, there’s no doubt that Choi is the one to look out for at the 2018 PyeongChang Winter Olympics. However, a month after the World Cup, Choi got injured during training. Making things worse, he got injured again by competing before he was fully recovered.

“A lot of people are expecting to see a good result, but I’m trying to go back to the time when I didn’t know anything,” Choi said. “Now I’m starting to realize what it meant when Coach Dawson told me to just let it go.”

As Choi was rushing to see results, his ranking dropped while his injury got worse. Following the advice of Dawson, Choi decided to let the pressure go and try to get back to a time when he competed just because he enjoyed skiing.

In an effort to focus on his goals, Choi quit drinking, stopped seeing his friends and even sold his car. He also stopped using social media and went to the Taereung Training Center in order to train with athletes of different sports.

“Taereung had a different energy,” Choi said. “I was out of breath just by looking at the wrestlers, judokas and taekwondo athletes train. When I trained with boxers, badminton players and skaters, I realized how comfortable my life was as an athlete.”

After months of training at Taereung, Choi started making his comeback. At the 2017 Sapporo Asian Winter Games, he won silver and finished fourth three times in FIS World Cup races.

Most recently, Choi defeated Mikael Kingsbury of Canada during a qualification race at the FIS World Cup Moguls in Deer Valley. Though he was disqualified for falling during his landing, his result in the qualification race was enough to bring his confidence level up for the upcoming PyeongChang Games.

“I fell spectacularly but I didn’t get injured,” Choi said. “When I finished first in the qualification race, I started shaking because I got so excited.”

For Choi to win a gold medal at the PyeongChang Olympics, he’ll have to overcome Kingsbury. Kingsbury is dominant in mogul skiing, having won the FIS World Cup race a total of 48 times throughout his career. However, Choi believes that the race in PyeongChang will be more of a battle against himself.

“I believe that this is completely a race against myself,” Choi said. “I’m going to try to empty my mind so that the competition doesn’t disrupt my concentration.”