Two Korean figure skaters preparing for their Olympic debuts have submitted solid performances in their final tune-up competition, an encouraging development for fans waiting for their next big star. 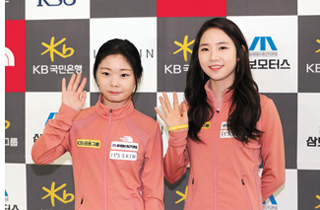 The Four Continents Figure Skating Championships are open to all non-European skaters.

Choi and Kim may never be mistaken for Kim Yu-na, the 2010 Olympic gold medalist and two-time world champion and a complete skater who boasted world-class skills and breathtaking artistry. But Choi and Kim Ha-nul are still young and have displayed enough promise to give demanding fans some hope - if not at the PyeongChang Olympics next month, then at competitions down the road.

Since that time, it’s been a struggle on and off the ice for Choi. Her mother passed away in June, an event so tragic that Choi even contemplated sitting out the Olympic trials altogether. When Choi regrouped and returned to the ice, she had to contend with loose skating boots, which led to ankle problems.

Choi still won one of two Olympic spots with relative ease. Just before the third and the final leg of the Olympic trials earlier this month, Choi decided to go with a different boot for each foot, after failing to find a pair that fit just right. And with her newfound comfort, Choi scored 190.12 points, then the best score of the season. She hadn’t cracked 180 points in her three previous appearances.

Then at the Four Continents, Choi picked up where she left off. In her free skate, Choi was mostly flawless, save for a slight problem with her edge in the opening triple lutz-triple toe loop combination. Her spins and step sequence also looked solid, and she was so pleased with her own performance that she pumped her right fist at the end.

“I didn’t have high expectations for myself, and I am so satisfied with fourth place,” Choi said in a statement released by her agency, All That Sports. “I will try to maintain this form through the Olympics, and have no regrets on the ice. I will try to skate even better at the Olympics.”

Kim Ha-nul is in her first senior season. In her first senior event last August, a relatively minor competition called the Philadelphia Summer International, Kim earned 180.41 points for the bronze medal. Her score at the Four Continents, her first major event, is the highest as recognized by the ISU.

Kim also made some quick, smart decisions to salvage her free skate program after a sloppy start.

After her final jump element, a double axel, Kim attempted to add a triple toe loop in combination but under-rotated the jump.

Such an ability to think quickly under pressure and improvise is a rarity among young skaters, and Kim, who won’t be 16 until April, is barely old enough to compete at the Olympics.

Before the Four Continents, Kim said her goal was to make her presence felt, saying, “Above all, I’d like to let the world know that a figure skater named Kim Ha-nul is out there competing.”

She’ll get another chance to make a name for herself at the PyeongChang Games, and if she can continue to progress at this rate, the figure skating world will surely remember her name at the end of the Olympics.