Rural school bounces back to a beat

Rural school bounces back to a beat 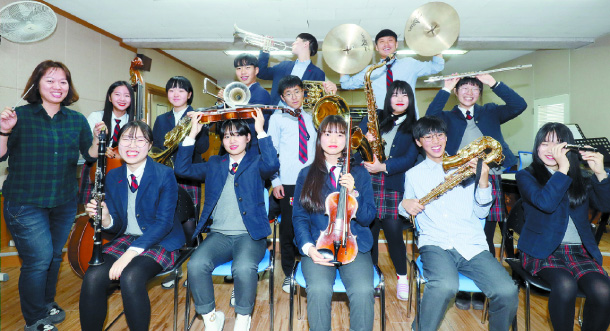 Orchestra members pose together at Palbong Middle School in Seosan, South Chungcheong, where every student learns to play at least one instrument. [KIM SEONG-TAE]

The sound of the orchestra poured into the hallway from the music room at Palbong Middle School in Seosan, South Chungcheong, where Yu Hyo-sun briefly paused to tell the 50 students, “Put your heart into it, and let’s try again.”

At Palbong Middle School, every student learns at least one instrument, which the school provides. Often by graduation, students have reached high levels of technical ability. “I didn’t even know about the euphonium before I enrolled at this school,” says one ninth-grader named Moon Ho-bin. “At first, it was challenging to make a sound out of it, but now I truly enjoy playing it.”

As the students have improved, so too has the school’s orchestra. Founded in 2011, it won a gold medal in 2015 and a bronze medal last year in the Korea Brass Band Contest. For its music program, the school itself also won the grand prize in the Ninth Afterschool Program Contest, co-hosted by the Ministry of Education, JoongAng Ilbo, Samsung Dream Scholarship Foundation and Korean Educational Development Institution.

In addition to improving the school’s reputation, the program has also given students in the area a rare opportunity. “The area here is all farming and fishing villages,” says Yu, “which means there isn’t a good environment to experience art and music. This orchestra program can help students experience music and learn how to communicate with others.”

But despite its current success, the school was until recently facing a serious problem. Founded in 1966, it was having difficulty recruiting students and its student body dwindled to as low as 66 by 2010, largely due to a decrease in the numbers of students in neighboring fishing and farming villages. Now, however, it boasts a student body of 150, with 80 percent coming from outside the local town, largely due to the expansion of the Seosan school district in 2008.

This solved one problem, but presented the school with another. “Because students are coming from 15 different elementary schools,” notes the headmaster, Jo Young-sun, “we worried that there might be conflict between students.”

But, Jo adds, the music program has proven to be an effective solution.

And it’s not just the administration that sees it that way.

“I play flute and am learning more from other students than from my teachers,” says one ninth-grader, Jang Han-na.

“It’s great to play, learn instruments through the program and get along with other students.”