The purity of sports

The purity of sports 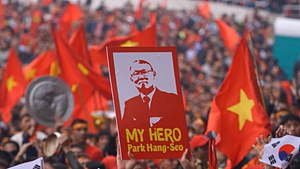 A large crowd of Vietnamese football fans wave their national flag and the Korean flag in the final match of the 2018 AFC U-23 Championship. Park Hang-seo, head coach of Vietnam’s national football team, led it to second place in the championship on Saturday. [YOUTUBE]

A South Korean star is born in Vietnam. The Vietnamese rave over him because he has made them happier and more proud of their country. He is Park Hang-seo, the head coach who has led the Vietnamese soccer team to second place at the Asian Football Confederation (AFC) Under-23 Championship. He delivered a Guus Hiddink-like moment — similar to when South Korea moved on to the 2002 World Cup semifinals under the Dutch coach — to the underdog ranked 112th in the FIFA standings in just four months since he took over the team.

Coincidentally, I was in Hanoi when Vietnam faced Qatar, which had won all four of its games in the tournament until the semifinals. There were hardly any vehicles on the streets of the bustling city of 12 million people. People were crammed in bars and homes to watch the historic game on television. When Vietnam won over Qatar via a penalty shootout, people rushed out and flooded the streets. Motorists honked horns and waved national flags. When I joined the revelry, many people asked if I was Korean. When I said yes, they raised their thumbs.

Nguyen Phu Binh, a former vice foreign minister and the first Vietnamese ambassador to Seoul after the countries established diplomatic ties a quarter of a century ago, talked about the magic Park has worked. “Vietnamese football has been weak because of our physiques. But Park fixed it. The team ran a full 120 minutes in the quarterfinals with Iraq and semifinals with Qatar plus the penalty shootouts. We could not believe it was our team. It was tireless, persistent, focused, and perfect in teamwork.” He went on: “Park has united the people. He has brought together South Korea and Vietnam. He has done what no statesman or diplomat could have achieved.”

Park assisted Hiddink at the 2002 World Cup, which was co-hosted by South Korea and Japan. He learned from the Dutch coach how to size up players purely on their talents, encourage them with team spirit, and discipline them in their research and practicing. Park was humane in his approach. Commentators said he was unlike any foreign coach. He always played ball with the players.

It snowed heavily in Changzhou, China when Vietnam was pitted against Uzbekistan in the final match on Saturday. The field was carpeted with snow. Vietnamese players were not used to playing in snow and chilly weather. The players were clad in gloves. But Park, nearly 60, did not wear them as they would get in the way of his hand signals. The Uzbeks had the edge in such a cold climate. Still, the Vietnamese fared well until extra time, although they allowed a defeating goal at the last minute. Despite a 2-1 loss, the Vietnamese players were cheered as champions because they did not give up until the end. They proved themselves on the field and stormed in when they found the chance.

The youngest player, Nguyen Quang Hai, made another stunning goal — his fifth in the championship. His equalizing left-footed free kick flew over a blockade of four defenders and cut through the goal net as the goalkeeper jumped to the opposite undefended side. The shrewd play could only have come from exceptional focus and persistent practice.

Wonderful sports scenes and gorgeous play evoke genuine awe. Great teamwork coupled with individual victories, demonstrations of devoted practice and honed skills can move any audience. I was as happy as if our national team had won. The beautiful free kick by Quang Hai reminded me of Lee Eul-yong’s left-footed free kick that flew over a defense wall 25 yards away and flew into the top corner of the goal during South Korea’s semi-final match in the 2002 World Cup against Turkey.

Coach Park has not made a miracle out of the Vietnamese football team. He just taught the basics and created this emotional victory. A show of tactics — particularly when it was engineered by a motivation other than sports — cannot last. We must go back to the basics — instead of political exploitation of Olympic sports — if the government really wants to make the country any better.