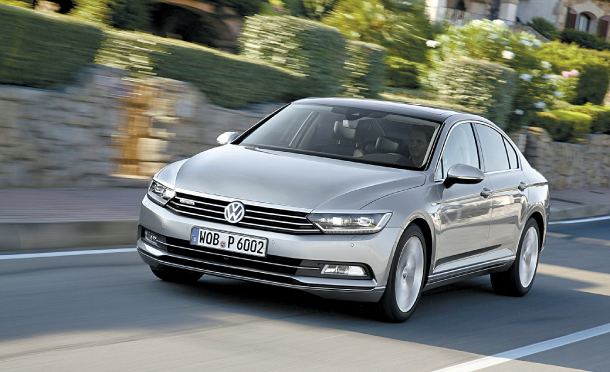 Volkswagen Korea will resume sales in February with the eighth generation of its flagship Passat sedan. [VOLKSWAGEN KOREA]

Volkswagen Korea will resume domestic sales with its flagship sedan, the Passat, nearly two years after it suspended sales due to a diesel-emission scandal that broke out in 2016.

The Korean unit of the German carmaker will start receiving pre-orders after holding a launching event on Feb. 1.

The Passat, now in its eighth generation, has sold 22 million units worldwide since it was first introduced in 1973.

Built on Volkswagen’s MQB platform, the new Passat will have a more spacious interior, with a longer wheelbase that has been extended by 74 millimeters (3 inches) compared to its previous version.

Volkswagen Korea said it has equipped the Passat with high-end convenience and safety features to cater to tech-savvy Korean consumers.

One of them is a pedestrian monitoring system being put into Volkswagen vehicles sold in Korea for the first time. The system uses radar technology to alert the driver to any possible pedestrians in the car’s path.

The new Passat also comes equipped with traffic jam assistance, which automatically follows the car ahead of the driver’s vehicle by accelerating and braking in order to maintain a fixed distance from the car ahead.

It works from low speeds up to 60 kilometers (31 miles) an hour.

Another feature is adaptive cruise control, which allows the car to maintain a speed of up to 160 kilometers an hour while also allowing it to slow down in order to avoid a collision with the car ahead - this differs from traffic jam assistance in that the car will not speed back up again to maintain a lock on the vehicle ahead.

Other safety features such as lane assist and front assist will be installed in all trims.

The analogue-style dashboard has been replaced with a 31.2-centimeter interactive TFT display, marking the first time a Volkswagen has been equipped with such a system. A head-up display has also been installed to better provide driving-related data.

In addition, a massage function and a ventilation feature have been added to the front seat, although these will depend on the trim.

“The new Passat GT has been armed with diverse technology that will cater to domestic consumers who have strict standards when it comes to premium sedans,” the company said in a statement.

Detailed specs and price information will be unveiled at the launching event on Feb. 1.