Creative ideas flourish with the help of Tumblbug : The crowdfunding platform has grown rapidly since 2011

Creative ideas flourish with the help of Tumblbug : The crowdfunding platform has grown rapidly since 2011 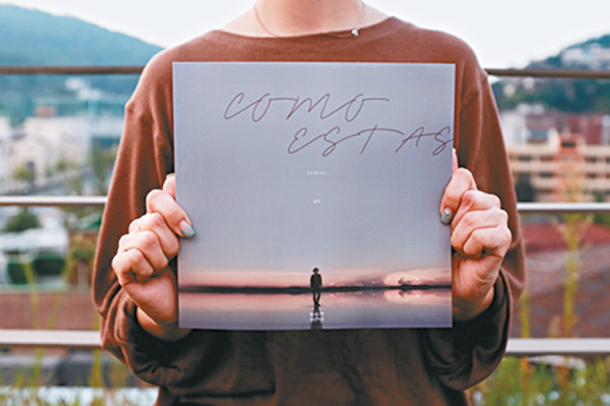 Lee Hyun-geun was able to publish his photograph collection “Como Estas” by collecting funds through Tumblbug, a crowdfunding platform for creative projects in the field of arts and culture. [LEE HYUN-GEUN]

Lee Hyun-geun, 33, loves to travel around the world and take photographs of people and their lives. His friends have long complimented him on his photographs and told him that he should publish a book to share the photographs and his stories. Lee wanted to explore the possibilities, but he had no idea how to contact a publishing company, or how much money he needed to get it out on the market.

“I’ve always wanted to publish photo books from each country that I’ve visited, but I’m not a professional photographer so I wasn’t really sure if it would sell,” said Lee.

Then, Lee came across an online crowdfunding platform called Tumblbug. Unlike other crowdfunding sites, Tumblbug specializes in helping artists and creators collect funds for their work. 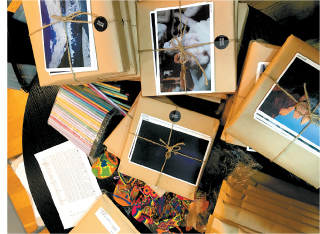 After achieving more than 200 percent of his fundraising goal, Lee prepares rewards to send to those who made donations. [LEE HYUN-GEUN]

After making a sample photo book of his trip to South America, Lee submitted his project to Tumblbug last September. After sending in his plan, Lee said he received feedback from Tumblbug the next day, telling him that he should specify his refund policies, and after that, he was good to go.

His goal was to collect 1.5 million won within a month. To his surprise, he collected about 3.4 million won from 123 funders.

After paying a 5 percent commission to Tumblbug, Lee was able to print about 160 copies of his book documenting his journey to South America, titled “Como Estas,” with the rest of the money.

“I was going to try selling it first on my Instagram account, but realized that it will be quite limited to the people I know,” said Lee. “I did some research and looked at what kind of projects come up on Tumblbug and noticed how it is so catered towards reaching those who are interested in supporting creators of art and culture.” 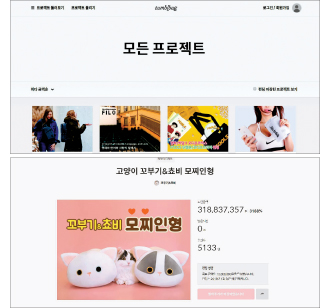 Top: Tumblbug’s main page shows projects that will end soon. Above: Tumblbug’s most popular project was one to create plush toys of two famous cats on YouTube, Ggobugi and Chobi. It raised about 318 million won (＄298,920) from about 5,000 funders. [SCREEN CAPTURE]

Lee says he’s going to continue sharing his photographs with those who show support and want to purchase his photo books.

“I always had this thirst to create these kinds of works, and thanks to these types of crowdfunding platforms for artists, I was able to achieve the dream I’ve always wanted,” Lee said. “People like myself would not be able to publish a book if it weren’t for Tumblbug. I think the funders at Tumblbug are those who want to spend money on something valuable and worthwhile culturally, in their perspective, and that in turn helps people like me to satisfy their desires to create art and culture.”

That is exactly why Tumblbug was created in the first place.

Its founder Yum Jae-seung was a university student at an art school studying film when he noticed how difficult it was for him and his friends to get funding for the films they were trying to create. Interested in existing crowdfunding platforms he had come across, Yum decided to create such a site with a friend, who was a programmer.

Tumblbug launched in 2011, and since then it has been growing at a rapid clip. So-called “creators” in fields as diverse as design, art, music and film use the platform to come up with seed money to produce a song, a piece of art, a play and so on. According to Tumblbug, about 2,200 projects successfully achieved their fundraising goals and produced works last year and a total of 15 billion won was collected.

The project that received the most funding was a recent project that created plush toys modeled after two famous cats on YouTube named Ggobugi and Chobi. The project collected about 318 million won from about 5,000 funders.

To learn more about Tumblbug, the Korea JoongAng Daily recently sat down with Yum at his office located inside WeWork in central Seoul. The following are edited excerpts from the interview. 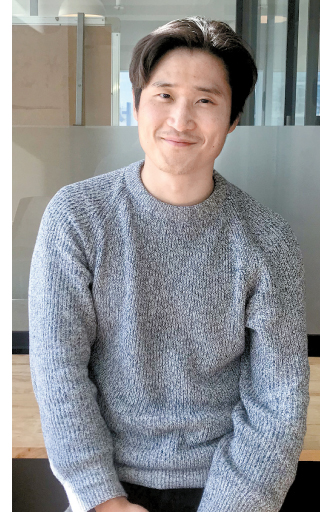 Q. Why did you want to create a crowdfunding platform for artists, or those you call “creators of art and culture”?

A. I myself was a student studying film and it is not easy to find investors as a student or an amateur who is just stepping foot into their industry. After launching the site in 2011, I realized that such a platform was so necessary for so many creators out there. It grew so fast, so I decided to drop out of film school and focus on this start-up.

I think there should be support and funding, whether it’s large or small, for any kind of creative attempts. I think 99 percent of such attempts don’t even get a chance to be tried out. Most times it is because they don’t have the funding and investors only look at the projects with one determinant of success - “Will it make money in the end?” But I don’t think creative projects should be judged only by money. I wanted to give opportunities for these creators.

Is there a crowdfunding platform that you modeled your company after?

Well, I just researched a lot about other crowdfunding platforms and businesses like Airbnb to study how they operate. But there’s no exact crowdfunding platform that I wanted to create Tumblbug to be like. I just gathered some ideas on how to operate the platform by researching other sites.

What makes Tumblbug different from other crowdfunding platforms?

I think the biggest difference is the direction this platform wants to move toward. Other crowdfunding platforms may focus on collecting funds for bright and innovative ideas. But the core of Tumblbug is to support creative attempts. We want to help creators of diverse fields achieve their desires. That is the core motive of our existence. We don’t look to support start-ups that simply want to grow by double digits, but creators who want to create something meaningful in their lives, or other people’s lives. We also focus on projects that try to tackle social issues, such as feminism. The so-called Megalian t-shirt that says “Girls do not need a prince,” which became a controversy online after a female voice actress got fired from a game company for wearing the t-shirt, was one of Tumblbug’s projects. The t-shirts were given out as rewards for funders of a project.

Are there projects that Tumblbug rejects?

We never reject creators just because their projects don’t really appeal to us. But if their projects are too vague, or there’s no artistic or cultural value in their projects, then we try to guide them to make some alterations if they wish.

Is there a project you feel is especially worthwhile helping out as a founder?

It is a difficult question because there are so many great creations at Tumblbug. But I really appreciate those creators who joined in when I first launched the platform. I especially feel good when I see people saying that they couldn’t fulfill their desires of publishing a book, creating a play or shooting a documentary until they found Tumblbug.

Many people have started to say that they are “addicted” to funding projects on Tumblbug. Why do you think that has happened?

I am curious myself as well. I think it’s partly because they can discover not only innovative items here, but projects that have value, or those that touch on sensitive social issues like feminism. I don’t think you can find [a way to] fund [these] projects elsewhere.