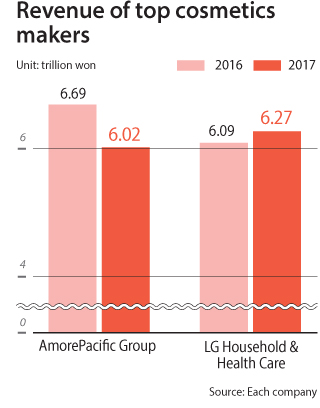 AmorePacific Group, long dominant in Korea’s cosmetics industry, has yielded its top spot to LG Household & Health Care for the first time since 2013.

In its earnings report Wednesday, AmorePacific said it made 6.02 trillion won ($5.7 billion) in revenue last year, a 10 percent fall from 2016. Operating profit came out to 731.5 billion won, down 32.4 percent from the previous year.

The cosmetics maker’s domestic business took a major hit last year after China banned travel agencies from arranging group tours to Korea. Chinese tourists have traditionally been a major source of revenue for the company, and the ban was a political response to Seoul’s decision to host a U.S. missile shield that Beijing believes threatens its national security.

Operating profit from AmorePacific’s domestic business dropped by 38.4 percent last year compared to the year before. “Sales from duty-free channels were especially weak due to the fewer numbers of Chinese tourists,” the company said in a statement.

Global sales, though, showed healthy growth. AmorePacific’s revenue from overseas jumped 7.3 percent to 1.82 trillion won. A majority of the growth came from Asian markets, where AmorePacific has been pushing its luxury line Sulwhasoo and affordable line Laneige.

Its presence in Western countries, however, retreated. Sales in North America dropped 1 percent, while sales in Europe fell 47 percent.

The poor performance allowed LG Household & Health Care, a longtime rival of AmorePacific that has always struggled to catch up, to snatch first place in Korea’s cosmetics industry for the first time since 2013.

To regain its position, AmorePacific plans to accelerate its global expansion this year. Etude House is scheduled to open its first store in Kuwait this month and Dubai next month. Laneige will land on Sephora shelves in Australia next month, and Mamonde expects to have its products on sale at ULTA in the United States soon.

Shares of AmorePacific dropped 3.23 percent upon the release of last year’s earnings to close at 299,500 won on Wednesday.

LG Household & Health Care, on the other hand, enjoyed a 1.38 percent bump to close at 1.18 million won.