KT breaks out 5G for Olympics

KT breaks out 5G for Olympics 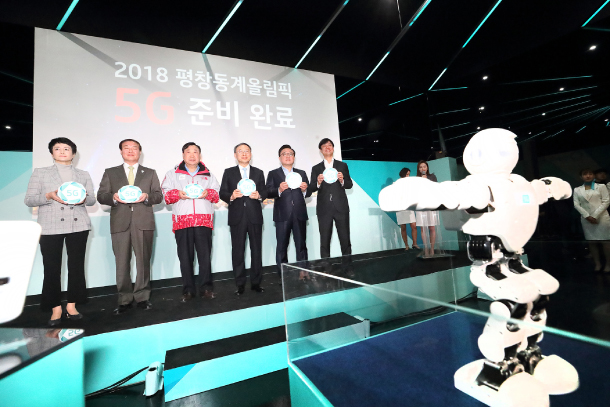 GANGNEUNG, Gangwon ­- KT celebrated the opening of an exhibition hall dedicated to technologies powered by 5G connectivity at the Gangneung Olympic Park on Wednesday. The country’s second-largest telecom service declared it was ready to launch a pilot service of the next-generation network at the PyeongChang Winter Olympics, nine days away.

During the Mobile World Congress in Barcelona in March 2015, KT announced a plan to become the world’s first mobile operator to launch a pilot 5G wireless service during the 2018 PyeongChang Winter Olympics with the longer-term goal of being the first to commercialize such a network. 5G, which boasts up to 20 times faster data transmission speed than the currently prevalent 4G, is expected to be the infrastructure for the so-called fourth industrial revolution.

The Gwanghwamun, central Seoul-based company responsible for communications and broadcasting during the Olympics has partnered with Intel and Samsung Electronics to demonstrate 5G technology in real-world conditions in Pyeongchang. Intel develops 5G modem chips and Samsung a tablet that works on both 4G and 5G networks. Some 200 of the 5G-enabled tablets will be available in Olympics venues in Gangwon for the public to try.

The competition to be the first in the world has turned fierce, with American operators AT&T and Verizon jumping in. Commercialization of the next-generation network is expected by the first half of 2019.

“The 5G pavilion will be an opportunity to meet the amazing future ahead of us that KT is painting,” said KT CEO Hwang Chang-gyu at the opening ceremony.

The ceremony was also attended by Oh Sung-mok, head of KT’s network group; Koh Dong-jin, Samsung’s head of IT and mobile communications business; Chang Byung-gyu, chairman of the presidential committee on the fourth industrial revolution; and Lee Hee-beom, president of the PyeongChang Organizing Committee.

The pentagon-shaped pavilion named “5G.Connected” offers various experiences for visitors to try. They can play virtual ice hockey with a large video screen that displays the moves of a virtual puck. The information is transmitted over 5G network. An Olympic torch relay challenge section allows a visitor wearing a virtual reality headset to deliver the torch by actually walking on a virtual pad that recognizes the steps. Another corner is devoted to making possible a virtual ski jumping experience via an immersive video screen, and a mixed reality room has adopted a game using hybrid reality that allowed only winners to exit.

For those who cannot travel to Gangwon, KT is opening another promotional pavilion near its headquarters in central Seoul on Feb. 9, which will be open through Feb. 25.

KT was the first among all official partners of the sporting event to complete a promotional hall at Olympic Park, where Gangneung Ice Arena is located. Other partners including McDonald’s, Visa, North Face and Alibaba were still preparing their pavilions. The KT pavilion will be open to the public from Feb. 8 through Feb. 25.