After wrangle with Washington, South’s skiers fly to North Korea

After wrangle with Washington, South’s skiers fly to North Korea 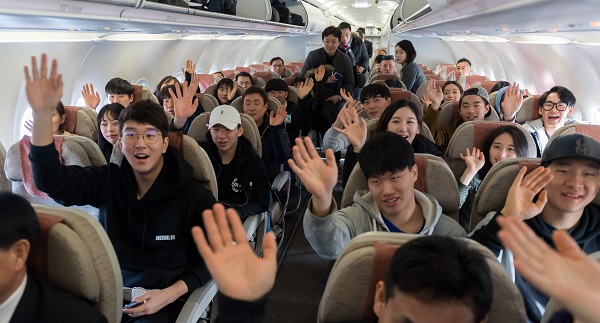 A delegation of 45 South Korean skiers and officials kicked off a trip to the Masikryong Ski Resort in North Korea Wednesday after Seoul wrangled with Washington up to the last minute over American sanctions barring planes that visit North Korea from traveling to the United States.

A group of 24 South Korean skiers accompanied by government officials and reporters embarked on the two-day trip, departing from Yangyang International Airport in Gangwon at around 10:40 a.m. Wednesday, according to the Ministry of Unification.

The delegation departed nearly 45 minutes later than intended on a chartered Asiana Airlines Airbus A321.

They arrived a little before noon at Kalma Airport in Wonsan, a city in North Korea’s Kangwon Province, a 45-minute bus ride from the Masikryong Ski Resort, as part of a series of reconciliatory inter-Korean events ahead of the PyeongChang Winter Olympics next week. After free skiing Wednesday and a joint training session with North Korea skiers, the group is supposed to return Thursday afternoon on the same aircraft, accompanied by a North Korean ski delegation.

The trip nearly fell through as South Korean and U.S. officials negotiated until one hour before the intended departure from Yangyang to be granted an exemption to Washington’s 180-day ban on any vessel or aircraft that has visited North Korea from landing in the United States.

The flight ban was included in President Donald Trump’s Executive Order 13810, issued in September 2017, which targeted individuals that trade with North Korea, aircraft and vessels that have traveled to North Korea and the funds of North Korean citizens.

A South Korean Ministry of Foreign Affairs spokesman said in a statement Wednesday that the government was able to “smoothly carry out the procedure to be granted an exemption from sanctions by the U.S. Treasury so that our companies are not affected over the flight of the aircraft used for our delegation to North Korea.”

It added that the government is in “close discussion with the United States about issues pertaining to North Korea's participation in the PyeongChang Winter Olympics, keeping with the stance of holding a successful Olympics while in compliance with sanctions against the North.”

Baik Tae-hyun, a spokesman for the Unification Ministry, told reporters in a briefing, “There was concern from the United States and the airline. That is why I understand we were able to mediate that area successfully.”

“We mediated with the United States so that controversy doesn’t arise over the sanctions issue,” said Baik. “The United States holds the stance that it will actively cooperate for the successful holding of the PyeongChang Olympics and for the peace of the Korean Peninsula.”

Amid ever-tighter sanctions on North Korea globally, this was the first such exemption granted to a Korean company.
A government source in Seoul told the JoongAng Ilbo that the United States had been reluctant to grant the exemption, adding, “It might have been difficult to head to Masikryong, but the United States took a step back taking into consideration that it could lead to a basis for overall dialogue.”

Wrangling between the U.S. and South Korea could indicate a possible rift in their approaches to Pyongyang.
Last week, ahead of a South Korean delegation’s trip, NBC Nightly News anchor Lester Holt broadcast from the Masikryong Ski Resort, describing it as “modern” and saying he was “treated with respect” by the North Koreans.

His reporting was criticized by some U.S. media as being orchestrated to promote leader Kim Jong-un’s luxury ski resort.
The Voice of American quoted a spokesperson for President Donald Trump's National Security Council as saying, “A first-year journalism student would know to highlight the severe constraints on their ability to report on North Korea as it truly is.”

Lee Joo-tae, director-general for inter-Korean exchange and cooperation at the Unification Ministry, who led the delegation to Masikryong, told reporters as he departed Yangyang, “This is a very important period in terms of inter-Korean relations, so the two sides, holding a posture of mutual respect, should smoothly carry out what was agreed together.”

He continued, “Taking into consideration the concerns and expectations of our people, we will closely cooperate with neighboring countries when going forward [with the inter-Korean joint training].”