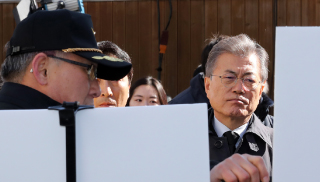 Misfortune often comes in waves. Before we could get over the shock of the fire that killed 29 in Jecheon, North Chungcheong, another fire in Miryang, South Gyeongsang, took 39 lives.

The key to preventing such disasters is early fire suppression and evacuation. Smoke detectors, fire extinguishers and sprinklers ought to be used to put out a blaze before it spreads. Emergency exits, ventilators and fire doors earn time for people to evacuate.

But in Miryang and Jecheon, both elements did not play out as they should have. Once again, there are signs that the greed of building owners made the disasters worse. Emergency exits were not clearly marked, structures were illegally extended and hospital beds were filled beyond capacity. As Democratic Party floor leader Woo Won-shik said, “The causes of the incident were again reckless deregulation and a profit-driven mind-set.”

In 1911, a fire broke out at the Triangle Shirtwaist Factory in New York. The owner kept the emergency doors locked, and 146 workers in their teens and 20s died as a result.

After the disaster, citizens, politicians and labor groups formed a Committee on Public Safety and established tight safety regulations. Since then, there have been no building fires in the United States with casualties of such scale.

At the time of the Triangle Shirtwaist Factory fire, the United States was a high-risk society where 100 people died every day. During the Gold Rush, the price of a man’s life was even cheaper than that of a donkey.

The frequency of accidents is inversely proportional to the price of human life at the time. Fifty years ago, the Gyeongbu Expressway connecting Seoul and Busan was completed in just 29 months, but not after the project took the lives of 77 construction workers. That’s 9.3 people for every kilometer of the highway.

The laid-back attitude of the high-growth era still prevails, much less than it is condemned. The building owners in Jecheon and Miryang still take chances when they are responsible for the lives and safety of others. The Korean economy has entered the top 10 in the world, but safety awareness hasn’t caught up with economic development. This backward mind-set of neglecting life is often described as “safety ignorance.”

But if you look closer, the slack management of building owners has been more malicious and linked to strict financial calculations. Sejong Hospital in Miryang illegally enlarged its space by 10 percent and operated as usual. The illegal extension that threatened safety brought immediate financial gains to the hospital.

Therefore, we need more effective and reasonable options than futile plans like “national safety diagnoses.” In order to discourage illegal construction, the economic gains that owners can enjoy from such acts must be offset. The fine for noncompliance could be raised by 100 times.

The Sewol ferry tragedy inspired national outrage and led to legislation forcing negligent parties to pay out far more compensation than actual damage. To make effective building safety plans, contributors to the cause must pay tremendous social and personal expenses.

What costs less than regulation and punishment is a preventative system through monitoring. However, bureaucrats are not only unskilled, they are also reluctant to monitor cases that require individual responses. Here, we need cooperation from the public. We can adopt a “primary doctor” for buildings, and informed citizens can proactively monitor and check safety.

The latest technological advancement allows for safety surveillance without people. Internet of Things technology can detect fires and irregularities in every corner of buildings, and virtual reality tools can recreate disasters and crime to prepare preventative measures.

Building information modeling allows for management and maintenance of all information related to construction materials and spaces. It is already a requirement in public construction projects in the United Kingdom.

Future technological investment for the public interest should be handled by the government, not the private sector. Safety management is expensive and does not come through misery and punishment.

*The author is a professor of architecture at Hanyang University.