Many roads lead to PyeongChang

Many roads lead to PyeongChang 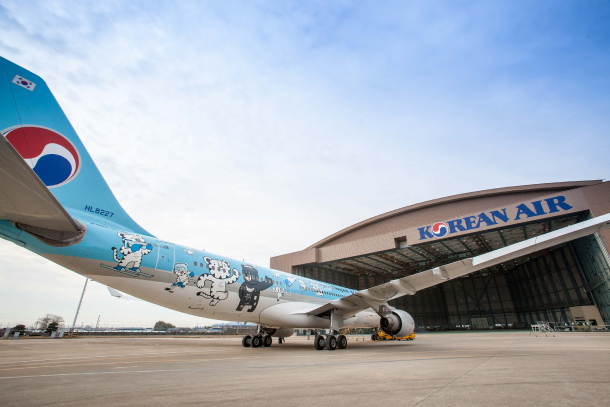 A Korean Air jet decorated with PyeongChang mascots Soohorang and Bandabi. The airline is an official partner of the Olympics. [KOREAN AIR]

Over 2,900 athletes from 92 countries have officially registered for the PyeongChang Olympics, making it the largest Winter Games ever, and Korean transport authorities are scrambling to offer the quickest and most convenient way to get to the site, located about 220 kilometers (140 miles) away from Incheon International Airport.

The easiest option is flying direct from Incheon to Gangwon, the coastal province where the Olympics will be held. The flight time is only about 30 to 40 minutes, according to a Korean Air spokesman, though factoring in takeoff, landing and taxiing, the whole trip will take an hour.

Korean Air, an official partner of the Olympics, temporarily added flights connecting Incheon and Yangyang International Airport in Gangwon on Thursday and will run them through Feb. 27, two days after the Olympics end.

Until Feb. 9, the opening day, there will be three connecting flights daily. During the Games, service will be reduced to two times a day then increase back to four to five times after the Games end on Feb. 25.

From Yangyang Airport, it takes about 30 minutes to get to Gangneung, where major skating events are being held, by bus or car. Throw in another half hour to get to Jinbu Station, where most of the snow events as well as the opening and closing ceremonies will be held. Shuttle buses traveling between Yangyang Airport and Olympic venues will be available.

The Japanese team plans to fly direct to Yangyang on a chartered plane. Previously, the regional airport was only able to accommodate small planes, but it recently expanded to accommodate larger 300- and 400-seaters.

Faster though it might be, the connecting flight from Incheon to Yangyang will set back travelers 88,000 won ($82) for a one-way trip. The flight can only be booked by passengers transferring from an international flight arriving at Incheon.

Another convenient option is the bullet train connecting Incheon and Gangneung. The KTX route was developed for the Olympics and opened last month.

Through Feb. 9, 16 trains will run daily from Incheon International Airport to Jinbu Station, with the earliest departing Terminal 2 at 7 a.m. and the latest at 10 p.m.

Among them, half will run nonstop from the airport to Jinbu Station since they will mostly be filled with athletes and Olympic officials.

It takes a nonstop train about two hours and six minutes to get from Terminal 2 to Jinbu Station and two hours and 40 minutes for an all-stop train. A one-way ticket costs 35,000 won, while those heading further to Gangneung will have to pay 40,700 won.

Spectators leaving from the Seoul metro area can board the KTX from Seoul Station or Cheongnyangni Station. From Seoul Station to Jinbu station, it takes roughly one hour and 40 minutes and costs 21,900 won.

With the service from Incheon and Seoul combined, there will be 51 KTX trains heading to the Olympics. Korail, the national rail operator, decided on Thursday to add 12 more times: one a day before the Games open, four on opening day, one the day after, two the day before the Games close and four on closing day.

Currently, Korail is running promotions for groups of four. Altogether, they will only have to pay 50,000 won for seats from Seoul Station to Gangneung.

According to the national rail operator, over 500,000 people have used the KTX to travel between Seoul and Gangneung as of Sunday, 37 days after it began operations.

To attract even more customers, Korail has added modems inside trains to enhance the speed of wireless internet service. The company said Tuesday that the modems have helped increased data supply onboard trains by 40 percent from 130 terabytes a month to 180 terabytes.

For the budget-conscious, going by bus is the cheapest option. The fare from Nambu Terminal in southern Seoul to Hoenggye near Jinbu Station is just 13,600 won. But expect a lot of traffic. Even without congestion, driving from Seoul to Hoenggye can take up to three hours.

Shuttle buses to Olympic venues will run from three train stations - Pyeongchang Station, Jinbu Station and Gangneung Station - as well as intercity bus terminals in the Gangwon area in five- to 10-minute intervals. The shuttle buses are free for all passengers even if they don’t have a KTX or bus ticket.

During the Olympic period, local buses in Pyeongchang and Gangneung will also be free for visitors.

Some residents might prefer to drive on their own, but a word of caution: there will be fines. The PyeongChang Organizing Committee has imposed a system where cars with odd-numbered license plates can drive on odd-numbered days and cars with even-numbered plates on even days to limit traffic.

In Pyeongchang County, drivers won’t be penalized for violating the guideline, but the city of Gangneung has decided to impose fines.

The organizing committee has also established reserved lanes for official Olympic vehicles on several roads including the Yeongdong Expressway connecting Gangneung and Daegwallyeong Interchange. Expect traffic in other lanes.

Nonetheless, the Ministry of Land, Infrastructure and Transport has decided to remove tolls at eight gates on the way to Olympic venues to lift some of the burden off drivers.

For those struggling to find the best way to Pyeongchang, KT, an official partner of the Olympics, has developed a navigation app called Go PyeongChang available in Chinese, English, Japanese and Korean. The app provides public transport directions as well as prices and times.

At the Olympic site, app users can scan a QR code on their event ticket and receive directions to the stadium. Go Pyeongchang is available on Android and iOS.