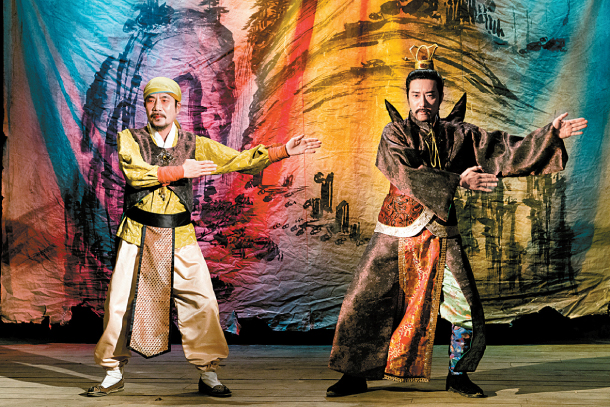 Once again directed by Kim Seok-yun, who was behind the two previous “Detective K” films, the upcoming “Detective K: Secret of the Living Dead” revolves around a detective (Kim) and his sidekick (Oh), who work to discover the killer behind a series of mysterious deaths of victims who all have teeth marks on their necks.

Set in the Joseon Dynasty (1392-1910), the movie co-stars the duo’s female partner who has the strength of Hercules but struggles to recover lost memories. Kim Ji-won plays the main female role, following Han Ji-min and Lee Yeon-hee from the 2011’s “Detective K” and the 2015’s “Detective K: Secret of the Lost Island,” which each sold 4.78 million and 3.87 million tickets at the box office.

“The previous movies in the franchise were quite successful, and I guess an important contributor to the [film’s] success was teamwork,” said Kim Myung-min during a press event held earlier this week.

As for Kim Ji-won, who shot to stardom following her appearance on the hit 2016 KBS2 series “Descendants of the Sun,” she was attracted to the film because it could expand the spectrum of roles she has played.

“Since it includes comedy elements in a period film, I had to spend a lot of effort trying to balance both the elements of comedy and mystery,” said the director.

He also implied that there is likely to be a follow-up in the series, adding that “I will continue to release films that combine elements in the future.”