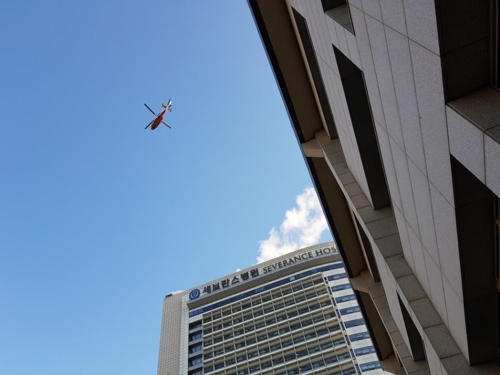 A helicopter approaches the rooftop of Severance Hospital in western Seoul after a fire began on the third floor. [YONHAP]

A blaze at Severance Hospital in Sinchon, western Seoul, this morning led to the emergency evacuation of patients.

The fire is said to have begun around 7:55 a.m. at a restaurant on the third floor of the hospital. The local fire department issued a level-two response alert out of its five-level alert systems around 8:45 a.m., meaning it judged the fire required the resources of two to five local fire departments.

The fire was put out by 9 a.m., according to authorities, but not before some 300 people including patients, visitors, medical staff and restaurant workers were evacuated out of the building. At least eight people were found to have inhaled smoke.

Some patients were evacuated by a helicopter from the rooftop.

The wards of the 20-story hospital are located on floors seven through 20.

The blaze at Severance Hospital was the third at a hospital in the last eight days. On Jan. 26 a fire at Sejong Hospital in Miryang, South Gyeongsang left 40 dead and more than 150 injured. The following day there was a fire at Shilla Hospital in Daegu, with no fatalities reported.