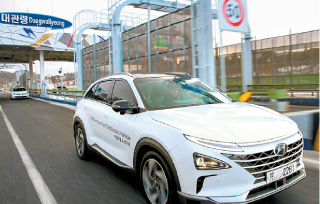 A self-driving car on the highway between Seoul and Pyeongchang County, Gangwon, on Friday. [HYUNDAI MOTOR]

Five self-driving Hyundai Motor vehicles drove 200 kilometers (120 miles) from Seoul to Pyeongchang County, Gangwon, on Friday in the world’s first demonstration of an autonomous fuel-cell car on a highway, the automaker said.

Three hydrogen-powered vehicles and two Genesis G80s with Level 4 autonomous car technology drove from the capital to South Korea’s northeastern Gangwon Province in a route that included highways, tunnels, interchanges, junctions and tollgates. It took 2 hours and 30 minutes to finish the course.

Level 4 technology based on the Society of Automotive Engineers’ standard is a level where a car can drive on its own without backup from a driver except for certain conditions.

According to Hyundai, the test vehicles started driving on their own upon entering the Gyeongbu Expressway and sped up to 110 kilometers an hour. When a car in front was too slow, they were capable of passing the vehicle, and at tollgates, they were able to slow to 30 kilometers an hour. When going through tunnels that blocked GPS signals, the cars relied on their own offline map and sensors to navigate their environment.

Hyundai said it equipped the vehicles with a rear-seat entertainment system that relies on KT’s 5G network. The automaker is making the self-driving fuel-cell vehicle available for test drives at the PyeongChang Winter Olympics to anyone who signs up.