Between politician and statesman

Between politician and statesman 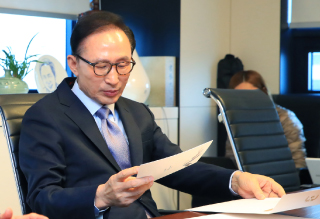 After my column titled “My Olympic dream” was published earlier last month, I faced fierce criticism for suggesting President Moon Jae-in ought to invite one of his predecessors, Lee Myung-bak, to the opening ceremony of the PyeongChang Winter Olympics.

“The peace of PyeongChang can only fly when the two wings of inter-Korean talks and South Korean unity are open,” I wrote. “The former and current presidents’ appearance in PyeongChang will symbolize the Korean people’s strong unity and patriotism, undeterred by the worst-ever security crisis.”

“The fruit of the PyeongChang Winter Olympics now goes to Moon,” I wrote. “Without the efforts of Lee Myung-bak and Lee Kun-hee, it would never have been possible. A country’s continuity must be maintained even if an administration changes.”

After the column was published, it received more than 2,000 comments on the internet. “Are you insane? Lee should go to jail!” one person wrote. “Root out garbage journalists and shut down the JoongAng Ilbo,” another person wrote. Some even questioned if I was bribed by the former president.

Hankyoreh, a left-leaning newspaper, even wrote a critical article, attacking me for writing a column based on “unilateral and arbitrary logic.” Those who worked on the Moon campaign during the presidential election ridiculed me for having published a fairy tale.

On Jan. 31, the president sent his senior political affairs secretary, Han Byung-do, to deliver an invitation to Lee to attend the opening ceremony. Moon went beyond his personal rage and generously admitted Lee’s accomplishment in securing the Winter Games for Korea.

It was an extremely rare practice in Korean politics, a display of Moon’s humble character and generosity. His politics will expand and his political assets will grow if he shows such character more often.

“Lee worked very hard to win the bid for the Winter Olympics. It is undesirable to bar him from attending the opening ceremony due to political circumstances,” Moon said.

During the presidency of Roh Moo-hyun, Moon witnessed two failed bids for the Winter Games while working as the senior secretary for civil affairs and later as chief of staff. Moon therefore knows very well about Lee’s hard work. That was probably the primary reason why Moon made a decision separate from the emotions and expectations of his loyal followers, a friendly newspaper and devoted aides.

But there is a bigger reason. He realized that he cannot host a massive international event with his political faction alone. The key to successfully hosting an Olympics is preventing unforeseen accidents, boosting the event’s popularity and creating an opportunity for the country to leap forward. The responsibility is on the incumbent president’s shoulders.

Moon also has the ambition of using the Olympics to arrange an inter-Korean summit and peace talks between the United States and North Korea. Without a majority of the Korean people’s backing, it is impossible to realize that goal.

Kim Soo-hyun, Moon’s senior secretary for social affairs, is the Blue House official in charge of managing the PyeongChang Winter Olympics. Kim has shown strong will to eradicate the vestiges of the previous administration, but even key aides like himself have become aware that without national unity, the success of the Olympics is impossible. They reportedly wonder what will happen to the country if Lee is subpoenaed for corruption instead of invited to the Games’ opening ceremony. They worry that even people who did not support Lee will feel pity for him if he laments, “Is this why I worked so hard to win the Olympic bid?” before facing the prosecution.

Eradicating the corrupt elements of past administrations is valuable to realizing the justice of an era, but it also creates a large cynical group in reaction. Moon the politician treats justice as the highest priority, but Moon the statesman must put his priority on national unity. It is a realistic and appropriate choice for Moon’s Blue House to slow down its campaign against past evils and bolster national unity.