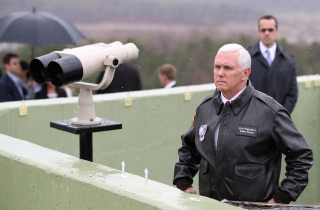 U.S. Vice President Mike Pence looks toward North Korea from an observation post at the border on April 17, 2017. [AP/YONHAP]

The Japanese official came for a discreet meeting arranged by the U.S. Forces Korea with Australian, Canadian and Japanese counterparts. They discussed a joint operation to evacuate their nationals out of South Korea in case a war breaks out on the peninsula.

Most notably, the Japanese official arrived on a U.S. Air Force plane instead of a civilian jet to avoid attention from Seoul. Were they overreacting, or are we naïve?

There has been a lot of talk about Washington withdrawing the hawkish scholar Victor Cha from consideration for ambassador to Seoul. Reports said he was crossed off after he expressed reservations about the military’s readiness to evacuate hundreds of thousands of Americans living in South Korea in case the Trump administration decides to take a military option against North Korea.

The mood so far is that Washington is putting up with Pyongyang until the Paralympics finish on March 18. In a security meeting in Hawaii, where South Korea and the United States confirmed they were putting off their annual drill until after the Games, Defense Secretary Jim Mattis made clear to his South Korean counterpart, Song Young-moo, that exercises will go on as scheduled after the Olympics without any scaledown.

Adm. Harry Harris, head of the U.S. Pacific Command, was reportedly the firmest about putting the delayed drills back on track. Song’s warning in Seoul that Pyongyang would disappear from the world map if it uses nuclear weapons came out of Harris’ mouth.

Three weeks ago, Mattis took the podium in a meeting of foreign ministers from 20 countries in Vancouver, Canada. There, his message was clear.

First, Washington can condone the conciliatory mood between the two Koreas over the Olympics Games, but will not relax its pressure.
Second, if foreign ministers cannot come up with a solution to stop North Korea’s weapons program, defense ministers will move in to discuss a military option. He made clear to them that Washington had a war plan.

U.S. Vice President Mike Pence is coming to South Korea to attend the opening ceremony of the PyeongChang Winter Olympics. Kim Yong-nam, technically the head of the North Korean state, will also be here at the same time. The Moon Jae-in administration is eager to arrange a meeting between the two.

The Blue House is hoping for political drama, but Washington has made clear it has no such intention. In fact, Pence will be accompanying Fred Warmbier, father of Otto Warmbier, the American student who died last June after his release from a North Korean prison. Pence also plans to visit a memorial hall commemorating the Cheonan warship, which was torpedoed by North Korea, and meet with North Korean defectors. His message in coming to South Korea is pretty clear.

The weeks after the Games could be pivotal. Seoul has made too many concessions by lifting a ban on land, sea and air travel by temporarily sending Asiana jets and allowing the Mangyonbong-92 ferry to enter South Korean waters to transport North Korean participants. It may have pushed Washington’s patience to its limits by weakening hard-won sanctions.

Seoul must not take lightly Washington’s rejection of Cha and President Trump’s introduction of North Korean defector Ji Seong-ho to underscore the cruelties of Pyongyang’s regime in his first State of the Union address. It must not become an imposing and insensitive host by making the U.S. VIP shake hands with Kim from the North. Otherwise, it may have to pay a dear or humiliating price after the Games. The North Korean threat is too grave to be solved through a pretentious handshake.