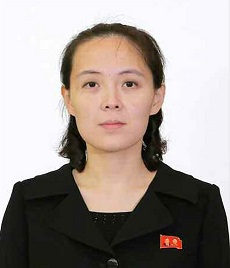 According to South Korea’s Unification Ministry, which handles inter-Korean affairs, Pyongyang told Seoul through the Panmunjom hotline on Wednesday afternoon that three delegates who will accompany Kim Yong-nam for the Olympics will be Kim Yo-jong, first vice-director of the Central Committee within the ruling Workers’ Party; Choe Hwi, chairman of the National Sports Guidance Committee; and Ri Son-gwon, chairman of the Committee of the Peaceful Reunification of the Country of the Democratic People’s Republic of Korea.

Other members of the delegation will include three reporters and 16 support staff, said the North.

Last month, a senior official in South Korea’s ruling Democratic Party told the JoongAng Ilbo that Kim Yo-jong, who formerly served as vice-director of the Propaganda and Agitation Department, was promoted last October to first vice-director of the powerful Organization and Guidance Department within the Central Committee of the ruling Workers’ Party, another sign that Kim Jong-un was solidifying his grip on power by swapping remnants of the former leadership with his own picks, including his own sister.

The Organization and Guidance Department generally has overall personnel control over senior officials in the party and military.
Around the same time, North Korean media announced that Kim was named an alternate member of the Workers’ Party’s Politburo during the second plenary meeting of the 7th Central Committee.