Stars of snow and ice will carry flags

Stars of snow and ice will carry flags 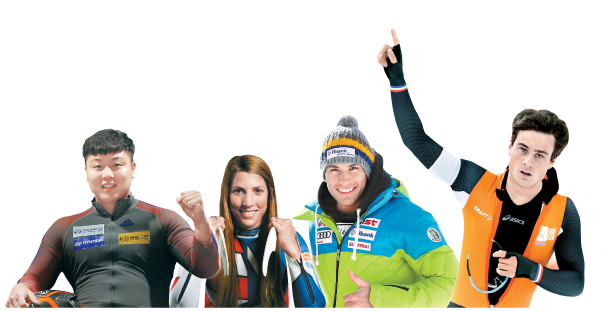 The list of flag bearers for the PyeongChang Winter Olympics opening ceremony is out. Fans will find some of their favorite athletes making their entrance at the PyeongChang Olympic Stadium in Gangwon tonight at 8 p.m.

France selected Martin Fourcade, 11-time world champion in men’s biathlon, to carry its flag during the opening ceremony. Since the 2011-12 season, the 30-year-old biathlete has held the No. 1 ranking and is a two-time gold medalist at the 2014 Sochi Olympics. With his impressive record, France didn’t need to think twice before picking him as flag bearer.

“I think entering as the flag bearer for the opening ceremony will give me a new perspective on the experience,” said Fourcade.

As a speed skating powerhouse, the Netherlands will send none other than speed skater Jan Smeekens to carry their flag. The 31-year-old specializes in 500-meter races and won his home country its first gold in the men’s 500 meters at the International Skating Union’s (ISU) World Single Distances Championships last February in Gangneung, Gangwon. The Netherlands, which usually performs best in the long-track speed skating relay, anticipates Smeekens will bring them gold for the 500-meter race in PyeongChang, according to Dutch news agencies.

“[Being selected as a flag bearer] is without a doubt great news,” Smeekens said. “I will proudly wave the Dutch flag at the opening ceremony.”

Another notable flag bearer is alpine skier Anna Veith of Austria. The 29-year-old was ranked No. 1 for two consecutive years during the 2013-14 and 2014-15 seasons on the International Ski Federation (FIS) World Cup Rankings.

Representing Bulgaria, fourth-ranked alpine snowboarder Radoslav Yankov will serve as flag bearer. Yankov and 10th-ranked Korean snowboarder Lee Sang-ho will compete for a spot on the podium in Pyeongchang.

Though there were rumors of replacing Japan’s ski jumper Noriaki Kasai as flag bearer, fans can rest assured that the 45-year-old ski legend will indeed enter holding his country’s flag tonight.

PyeongChang will be Kasai’s eighth Olympics. He has never won gold for an Olympic event, but managed to finish first at the 1992 FIS Ski Flying World Championships individual race.

Some participating nations have chosen two flag bearers - one female and one male - for the event.

For the first time in history, Canada has opted for two flag bearers. Figure skating ice dance pair Tessa Virtue and Scott Moir will march holding the Canadian flag side-by-side tonight. The two have been dancing together for over 20 years and have captured the hearts of many Canadians as three-time world champions.

“When our Olympic flag bearers march into the PyeongChang Olympic Stadium,” said Canadian Prime Minister Justin Trudeau, “they will be carrying not just the Canadian flag, but the hopes of every young person who aspires to represent Canada at the Olympics someday.”

Falling short of gold, the pair won a silver medal at the Sochi Olympics. After taking a break in 2014, Virtue and Moir made a strong comeback last year, coming first in both the ISU World Figure Skating Championships and the Four Continents Championships.

“This is undoubtedly the pinnacle of our career,” Virtue said at a press conference held Jan. 16 when they were announced as Canada’s flag bearers for PyeongChang.

Some countries had a hard time choosing their flag bearers.

After much deliberation, the United States, which will send its largest delegation in Olympic history, finally announced female luger Erin Hamlin as its flag bearer on Thursday.

“It was a pretty big shock,” Hamlin said, “but it is an honor and a privilege to be recognized by all of Team USA.”

Hamlin won a bronze medal in Sochi, becoming the first U.S. athlete to win an Olympic singles luge medal since the event debuted at the Olympics in 1964.

A member of the International Olympic Committee will lead the delegation of athletes from Russia under the Olympic flag.

South Korea, which will be marching as one with North Korea under the unification flag, announced men’s bobsledder Won Yun-jong as its flag bearer on Tuesday. The pilot teamed with brakeman Seo Young-woo to win the South’s first ever overall International Bobsleigh and Skeleton Federation’s World Cup Ranking title for two-man in 2016.

But his North Korean partner for the joint entrance remains a mystery.

The North has yet to confirm the identity of its flag bearer as of press time, but an athlete from the North’s women’s ice hockey team is seen as the most-likely candidate.