North scoffs at meetings with Americans in PyeongChang

North scoffs at meetings with Americans in PyeongChang 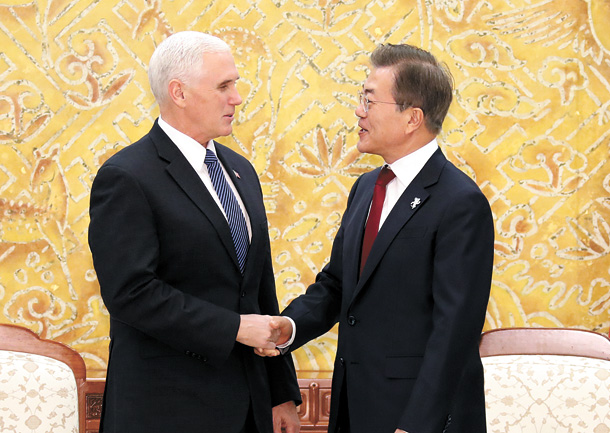 U.S. Vice President Mike Pence and President Moon Jae-in shake hands at the Blue House in Seoul Thursday as they head into a meeting and a dinner before the PyeongChang Olympic Games kick off today. [YONHAP]

North Korea said Thursday it has no intention to engage in talks with the United States on the sidelines of the Winter Olympics as President Moon Jae-in started an aggressive diplomatic campaign to broker dialogue between Pyongyang and Washington.

“We have never begged for dialogue with the United States and will be the same in the future,” Cho Yong-sam, a director of the North’s Foreign Ministry, was quoted as saying by the state-run Korean Central News Agency on Thursday. “We clearly state that we don’t have a willingness to meet with the U.S. side during our visit to South Korea.”

Cho made the comment on Wednesday, after the North informed the South that its high-level delegation would include Kim Yo-jong, younger sister of North Korean leader Kim Jong-un. The 23-member delegation will be led by Kim Yong-nam, president of the Presidium of the Supreme People’s Assembly, North Korea’s rubber-stamp legislature, and technically head of state.

Cho also complained about U.S. Vice President Mike Pence’s remarks on possible contacts with the North on the sidelines of the Olympics. “I haven’t requested any meeting. But we’ll see what happens,” Pence said earlier this week.

According to KCNA, Cho said Pence’s remarks were rude and ridiculous because the North Korean delegation is visiting the South to support the Olympics. He said the North has no intention of politicizing an international sports event.

On Thursday, Moon had a series of meetings with visiting foreign leaders at the Blue House as they made their ways to attend the opening ceremony of the PyeongChang Winter Olympic Games. The ceremony is scheduled for tonight.

U.S. Vice President Pence arrived in Korea on Thursday and had a meeting and dinner with Moon at the Blue House. Moon said he will try to get Pyongyang to join talks for denuclearization and peace.

Pence said the United States will continue to work with Korea to put maximum pressure on the North to resolve the nuclear and missile crises, promising undeterred resolve to defend the alliance with Korea and the security of the region.

When Moon had a phone conversation with U.S. President Donald Trump on Feb. 2, he proposed that Pence meet the North Korean delegation.

The North Korean delegation is scheduled to arrive in the South today, and the Blue House said Moon will host a lunch for its members on Saturday.

Before attending the opening ceremony tonight, Moon will host a reception for the foreign dignitaries. Pence may run into Kim Yong-nam, the head of the North’s delegation, at the reception, but it remains to be seen if their meeting will include any meaningful discussion.

Earlier in the day, Moon received Han Zheng, chief of China’s official delegation and a member of the Politburo Standing Committee of the Communist Party. At their meeting, Moon asked for the Chinese government’s support to arrange North-U.S. talks.

“The North is enthusiastically engaging in the inter-Korean talks, starting with the Olympics,” Moon told Han, who visited as a special envoy of Chinese President Xi Jinping. “This dialogue must lead to peaceful denuclearization of the Korean Peninsula. I hope the Chinese government will play more of a role.”

“South Korea and China must work together to facilitate direct talks between the United States and North Korea,” Han said.

During a luncheon with the German president, Moon stressed the importance of using the amicable mood generated by the inter-Korean talks to arrange a North-U.S. dialogue after the PyeongChang Winter Olympic Games.