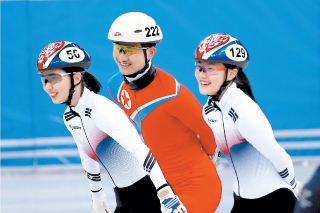 From left, South Korea’s Kim Ye-jin, North Korea’s Jong Kwang-bom and South Korea’s Lee Yu-bin skate during a joint training session at Gangneung Ice Arena in Gangwon on Thursday. The North Korean short-track speed skaters — Jong and Choe Un-song — were scheduled to train at 12:30 p.m. with the Chinese short-track team at the indoor ice rink in Gangneung Yeongdong University, but instead joined South Korea along with two German speed skaters. Starting tonight, the first short-track medal race will be held with the men’s 1,500-meter race, in which South Korea’s Kwak Yoon-gy and the North’s Choe will compete. [YONHAP]