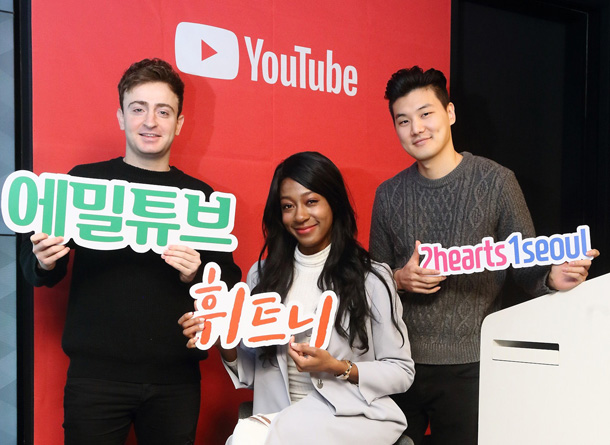 From left: Popular YouTubers Emil from “EmilTUBE,” Whitney from “Whitneybae” and Kyuho from “2hearts1seoul” pose at a YouTube event in Gangnam, southern Seoul. [YOUTUBE]

On Feb. 7 three of the most famous foreign YouTube creators in Korea gathered to share their experience of living in the country.

The YouTubers discussed the content that they have created and their future plans for their respective channels at the conference in Gangnam, southern Seoul.

The three all shared interesting stories behind the creation of their channels.

While Whitney first came to Seoul to work for a software company, she soon discovered that she had a wealth of personal anecdotes regarding amusing cultural differences that she wanted to share with others.

Emil, on the other hand, started his YouTube channel because he came to Korea as an English teacher, and he saw the common mistakes that his students were making when they started learning the language. He started to upload mini classes to explain the mistakes and how to use English properly.

The final channel, “2hearts1seoul” was born as Sarah’s parents were growing increasingly worried about the bad news they continuously heard from Korea, at a time when North Korea’s rhetoric was escalating. “I wanted to reassure them that Korea is not a dangerous place to live,” Kyuho said. “So I started recording about what kind of lives we were living in Seoul, and how Koreans were, and introduce the country to her parents.” He added that he had no idea that his small pastime would turn into a popular channel.

“What’s so attractive about YouTube channels is that the creator’s own personality and its own distinct colors are naturally fused into the videos,” Emil said. “For me, it was that I saw Korea from a British man’s perspective.” To develop his content even further, Emil promised his subscribers that he would upload one vlog (video logs) per day - so far he’s proven to be up to challenge.

Although he is now always tired from editing and posting videos, he admitted that thinking up new ideas is not that difficult. He usually plans out what he will film during his free time, for instance when he’s taking a shower or relaxing. “Turning off my smartphones and just brainstorming helps the idea banks flow,” he said.

Whitney has two channels that she’s currently uploading to, one for her Korean subscribers and another that is more international. She said that Korean viewers are more interested in keeping up with the latest trends, which is why she uploads a lot of targeted content such as cosmetics testing, eating videos, known as meokbang in Korean, and playing with slime.

Her international viewers are more interested in her life in Korea, like how she spends her free time in a foreign country.

“Koreans definitely love meokbangs,” Emil said. “When they are uploaded to a channel, the number of clicks goes up like crazy.”

The other difference between foreign and Korean subscribers was subtitles, which local viewers definitely prefer. Although putting up subtitles is time-consuming, Emil adds them for the sake of his Korean subscribers, even though neglecting them could get him a few more hours of sleep.

When asked about the recent appeal of content related to Korea, Kyuho and Emil had interesting replies.

“One of the things about Korea that Sarah really enjoys a lot is the street food,” Kyuho said. “She said that it is part of Korea’s distinct culture, as the variety and quality of the foods are incredible, ranging from little side dishes you eat with soju, to hotteok (a type of Korean pancake filled with honey and nuts) and bungeobbang (a fish-shaped bun stuffed with adzuki beans), which she especially loves.”

Emil added that dalkgalbi (a Korean stir-fried chicken dish) and dakbokkeumtang (Korean spicy chicken stew) are two dishes that foreigners cannot miss if they come to the country, emphasizing that he has never met a foreigner that didn’t like those dishes.

Emil has also traveled around Korea to introduce less-known areas to Koreans and foreigners alike, and one region that he urges everyone to visit is Geoje Island. He recalled that “everything in the island looks like a piece of art.”

While the YouTubers are already popular and loved by their fans and subscribers, their channels are still in the process of growing, and the three creators each shared their future goals.

“One of the comments that touched our hearts was that one subscriber starts their Sunday morning with our clips, with a cup of coffee in the other hand,” said Kyuho. The couple wants to keep on finding the hidden charms of Korea and introduce them to their subscribers.

Emil, meanwhile, has a clear goal in his mind - to hit a million subscribers for “EmilTUBE.”

Whitney admitted that just covering the content she is interested in is pretty much her dream come true. “I’ve always wanted to be an entertainer since I was young,” she said. “I feel so lucky to be doing what I enjoy so much and interacting with my subscribers. Maybe one day I want to star on TV, but for now I am content to be doing what I’m passionate about.”