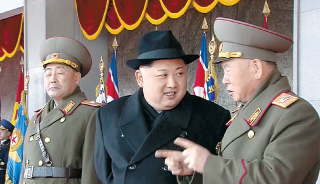 The North Korean leader was flanked by Ri Myong-su, chief of the Korean People’s Army’s General Staff, and Kim Jong-gak, the newly appointed director of the Army’s General Political Bureau, both of whom are vice marshals.

The last time Ri appeared in public with Kim Jong-un was in late July of last year, when he was part of a delegation that visited a cemetery for war martyrs. Kim Jong-gak had not been seen with the leader since December 2014.

The main podium was mostly filled with military officials, while other high-profile officials from the government and Workers’ Party were seated in a separate corner with Kim Jong-un’s wife, Ri Sol-ju, including Prime Minister Pak Pong-ju and Choe Ryong-hae, vice chairman of the Central Committee within the Workers’ Party, a member of the Presidium of the Central Committee’s Politburo and vice chairman of the State Affairs Commission.

The North usually intermingles the seating of officials from the military, government and Workers’ Party during military parades, but a South Korean official from the Unification Ministry, which handles inter-Korean affairs, projected that the regime had military officials sit closer to Kim Jong-un last Thursday because the parade was specifically intended to celebrate the army founding day.

When the North held a military parade last year on April 15 to celebrate the 105th birthday of late state founder Kim Il Sung, Kim jong-un was flanked by Prime Minister Pak Pong-ju and Hwang Pyong-so, then director of the Army’s General Political Bureau.

South Korea’s spy agency told a parliamentary briefing last Monday that Hwang was fired from his post and is now undergoing ideological re-education for holding “impure attitudes” toward Kim Jong-un.

Kim Jong-gak, Hwang’s successor, rose to defense minister in 2012 but was quickly sidelined late that year to become the president of Kim Il Sung Military University, inducing North Korea watchers to think he was no longer favored by Kim Jong-un. That changed this week, when the South’s National Intelligence Service announced his new role and the North confirmed it by placing him close to the leader during the parade.

Ri Pyong-chol, first vice director of the Munitions Industry Department of the Workers’ Party, who had not appeared in North Korean media since Pyongyang conducted a Hwasong-15 intercontinental ballistic missile test on Aug. 29 of last year, resurfaced this week in the military parade, but with three stars on his uniform, down from four.

The Unification Ministry official said Ri, who once was known to be Kim Jong-un’s most trusted frontman for missile development, appears to have been punished, though it was unclear for what reason.

Local authorities project the North to have mobilized 13,000 goose-stepping troops for the parade Thursday, as well as tens of thousands of civilians who held colored placards to spell out propaganda slogans. The regime appears to have made several efforts to keep it low-key, such as refraining from inviting foreign journalists to cover the event and giving prior notice through its state-run media. The parade began at 11:30 a.m., Seoul time.

Local authorities said no major new weapons appear to have been rolled out, but Michael Elleman, a senior fellow for missile defense at the International Institute for Strategic Studies, wrote on 38 North, a North Korea analysis website, that one new solid-fuel, short-range ballistic missile (SRBM) was unveiled.