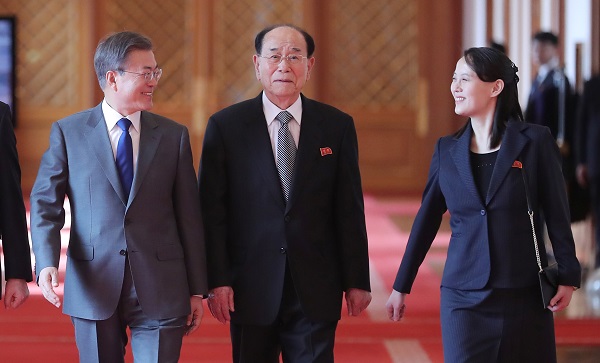 President Moon Jae-in, left, talks with Kim Yo-jong, right, the younger sister of North Korean leader Kim Jong-un, while they walk to a luncheon in the Blue House on Saturday. Kim Yong-nam, North Korea’s nominal head of state, is seen in the center. [YONHAP]

Kim Yo-jong, the sister of the North Korean leader, delivered Kim Jong-un’s letter and a verbal invitation to Moon on behalf of her brother during a three-hour meeting at the presidential residence in Seoul on Saturday, according to the Blue House.

“I am willing to meet with President Moon in the near future,” Kim Yo-jong quoted Kim Jong-un as saying, according to presidential spokesman Kim Eui-kyeom. “I request you visit North Korea at your earliest convenience.”

According to the spokesman, Moon replied, “Let’s create the conditions and hold the summit.”
The South Korean president met with a delegation of North Koreans who were in the country for the PyeongChang Winter Olympics.

They discussed a wide range of issues concerning inter-Korean relations in an amicable mood, according to the Blue House. Moon in particular made a strong push for direct dialogue between North Korea and the United States.

“For the sake of advancing relations between the two Koreas, it is imperative for the North and the United States to talk soon,” Moon was quoted as saying by his spokesman.

The two sides agreed that they must maintain a reconciliatory mood on the peninsula after the Winter Olympics and invigorate talks and cooperative exchanges between the two Koreas.

A senior presidential aide said Moon’s response was a de facto acceptance of the invitation, adding that the president is enthusiastic to have an inter-Korean summit in the early days of his presidency to keep the momentum of improving relations.

The two Koreas have only held two summits — one in 2000 and another in 2007, both under liberal administrations. Moon, too, is a liberal.
Asked if direct talks between the North and United States are the “conditions” that Moon cited for the summit, the official said the
Pyongyang-Washington issue is an important factor to improve inter-Korean ties.
“The two axles must spin together to make wheels move,” he said.

According to the aide, Moon made no direct mention of the North’s nuclear arms program during the meeting on Saturday.
Speculation was high that Kim Jong-un would propose an inter-Korean summit when he sent his sister to join the North’s Olympic delegation. Moon already said in January that he was open to a meeting with the North Korean leader — if conditions are appropriate and if the summit guarantees an outcome.

The North’s invitation comes as the United States is escalating pressure on the reclusive regime to give up its weapons program. Washington has made clear that it will not have any contact with Pyongyang unless it embarks on substantial denuclearization.
In a show of defiance, U.S. Vice President Mike Pence attended the opening ceremony of the Winter Olympics on Friday and remained seated when the joint Korean team walked into the stadium.

Moon has tried to broker direct talks between Pyongyang and Washington by arranging a face-to-face encounter between the heads of the North Korean and U.S. delegations on the sidelines of the Winter Olympics, but his attempt fell through on Thursday when Pence skipped a presidential dinner that included the North Korean delegate.

Kim Yo-jong is the first immediate member of the ruling Kim family to visit South Korea since the 1950-53 Korean War. Her visit to the Blue House is also the first in over eight years by a senior North Korean official.

In August 2009, the North sent a delegation led by Workers’ Party Secretary Kim Ki-nam to pay condolences to former President Kim Dae-jung, who passed away that month and organized the first inter-Korean summit.

The most recent delegation was led by Kim Yong-nam, the president of the Presidium of the Supreme People’s Assembly, which makes him the technical head of state. Choe Hwi, chairman of the National Sports Guidance Committee, and Ri Son-gwon, chairman of the North’s Committee of the Peaceful Reunification, were also delegates.

The meeting between the North Korean delegation and President Moon began at 11:10 p.m., according to the Blue House. After the talks, the delegation signed a guestbook and attended a presidential luncheon. The entire event at the Blue House took two hours and 50 minutes.

Moon was accompanied by Suh Hoon, director of the National Intelligence Service; Cho Myoung-gyon, the minister of unification who handles inter-Korean affairs; Im Jong-seok, Moon’s chief of staff; and Chung Eui-yong, head of the National Security Office.
Kim Yo-jong carried a blue file folder with the official North Korean emblem in embossed in gold, fueling speculation about its contents. She placed the folder on the table in front of her before the meeting started.

An analysis of photos of the meeting showed that the emblem was the official state symbol of North Korea. The design, created in 1948, includes a red star, the symbol of the ruling Workers’ Party, and Mount Paektu, the highest peak on the Korean Peninsula and a significant element of the Kim family mythology.

The file was an indication that Kim Jong-un was sending a message not as chairman of the Workers’ Party but using his newest title as chairman of the Commission on State Affairs. In 2016, he created the new agency and put himself in charge of it. It replaced the National Defense Commission, the most powerful office under his late father Kim Jong-il.

When Kim Jong-il held the first inter-Korean summit in 2000, he used the title of chairman of the National Defense Commission.
All members of the North Korean delegation were wearing the double-portrait lapel pins of the North’s late leaders — founder Kim Il Sung and Kim Jong-il.

Upon their arrival at the Blue House, the delegation was received by Im, the chief of staff, outside the main building, and President Moon later greeted them in the lobby.

During the North Korean delegation’s visit, Kim Song-hye, a senior official from the Propaganda and Agitation Department of the Workers’ Party, closely assisted Kim Yo-jong throughout. Kim Song-hye has taken part in numerous negotiations between the two Koreas.