Pohang wakes up to another powerful quake

Pohang wakes up to another powerful quake 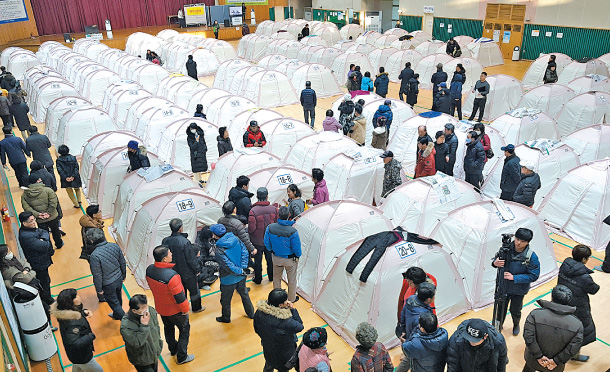 Residents of Pohang, North Gyeongsang, at an evacuation center in the city after a 4.6-magnitude quake hit Sunday morning. Only three months ago, the city was hit by a 5.4-magnitude earthquake - the strongest in the country’s history. [YONHAP]

After a 4.6-magnitude earthquake shook the North Gyeongsang city of Pohang on Sunday morning, the same city that was hit by the 5.4-magnitude quake just three months ago, experts warned that stronger quakes may be coming to the region as the faults shift underground.

“The aftershocks following the quake in November have increased this month and Pohang was hit by the strongest aftershock ever on Sunday,” Hong Tae-kyung, professor of earth system sciences at Yonsei University in western Seoul, told the JoongAng Ilbo. “My analysis is that the seismic stress seems to be growing over time and as the stratum isn’t able to hold up the stress, the city is being hit by stronger and stronger aftershocks.

“There may be more faults under Pohang than we know of,” he said. “And if the faults keep shifting during the aftershocks, the city could experience stronger quakes in the future.”

The quake hit Pohang around 5:03 a.m. and injured 22 people, including a 21-year-old student of Pohang University of Science and Technology, who fell while evacuating from a university building and injured his head.

At least 19 cases of property damages, including elevator systems that have stuck doors or shut down, were reported to authorities. The Ministry of the Interior and Safety said that authorities received 1,462 reports regarding the quake as of 8:30 a.m. Sunday - 176 were made from North Gyeongsang, 321 from Busan, 352 from Daegu and 134 from Ulsan.

Some 300 people who have been living in a gymnasium in Pohang since the quake in November had to re-live their traumatic experience on Sunday morning.

“It’s been months since we experienced the strong quake in November, but I still have trouble sleeping,” said a 65-year-old woman surnamed Park who has been living in one of the 140 tents installed in the gym since November. “I have been on meds because I feel dizzy often and I’m always jittery because I don’t know when the next quake will come.”

“My family and I, altogether five people, ran out of the gym after waking up during the quake,” said a 46-year-old woman surnamed Suh. “If the quake was closer to the ground level, the tremors would have been worse. The Pohang city government talked about shutting down the evacuation center at the gym yesterday, but it can’t be shutting it down now after experiencing yet another quake this morning.”

The Nov. 15 quake was the strongest ever to hit Korea, damaging at least 3,300 structures, displacing nearly 1,800 people and injuring some 90.

The gym once housed over 1,000 people after the quake in November, but the number dropped to around 300 after the government offered 160 families free housing for six months. The recipients were selected based on how damaged their homes were.

Those who remained at the gym have stayed on even though the government said their homes were safe to return to. They have asked private companies to re-examine their homes.

The city government had planned to shut down the evacuation center on Saturday, but decided to keep it open until the private companies’ analyses are out.

But entering a new home did not necessarily allay the trauma of the residents.

“I moved into the housing provided by the government, but when I felt the tremor early in the morning I fled to the gym,” said a 60-year-old woman surnamed Jin. “I don’t feel safe in the new apartment that the government has provided me.”

“We need to find out why the quakes keep coming before residents can find their peace,” said Kim Yeong-bong, a 54-year-old resident of Buk District. “The authorities need to share with the people the state of liquefaction in the area as well as other dangers and damage.”

All nuclear power plants in operation throughout the country were deemed safe by the Korea Hydro & Nuclear Power Company. The Pohang city government plans to inspect buildings in the city that were found to be more vulnerable to quakes last year.

Some experts said that the tremors felt may not have been an aftershock of November’s event, but a new earthquake.

“The tremors on Sunday were too strong to be an aftershock of the 5.4-magntidue quake in November,” said Kyung Jae-bok, professor of earth sciences at Korea National University of Education in North Chungcheong. “It could be a new earthquake of its own. We will know what it is for sure after analyzing the patterns of aftershocks that follow this one.”