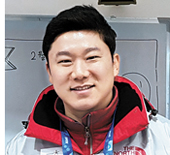 The four-time Olympic shooting champion - with three gold medals from the 50-meter pistol and one from the 10-meter air pistol - guided fans at Kwandong Hockey Centre in the city of Gangneung, Gangwon, on Sunday, according to the PyeongChang Organizing Committee.

“I heard about ‘special volunteer workers’ from the Korean Sports & Olympic Committee and signed up for it,” Jin said, “wanting to take part in the Olympics held in Korea.”

About 15,000 volunteers are currently working in and around the Olympics host town of Pyeongchang, some 180 kilometers (112 miles) east of Seoul. The organizing committee has named 39 “special volunteers,” including renowned sports figures, politicians and citizens, to support the Winter Games.

Jin, 38, is the first shooter, man or woman, to win a single event at three consecutive Olympics. He is also the first Korean athlete to win a gold medal at three Olympics in a row, winter or summer.

Jin also got to experience the Olympics as a spectator, watching Korean short-track speed skater Lim Hyo-jun win gold in the men’s 1,500-meter event on Saturday at Gangneung Ice Arena in Gangwon. It was the host nation’s first gold of these Olympic Games.

“I’ve only competed at the Olympics, and it’s been an emotional experience watching other athletes in action,” Jin said. “I thought to myself, ‘So this is how people must feel when they cheer on athletes.’ It was really moving.”

Having traded his national team uniform for volunteer gear, Jin said he has also developed a fresh perspective on the Olympics.

“I think the Olympic Games really bring the world together,” he said. “Everyone is just cheering on the athletes and enjoying sports for what they are.”

The four-time Olympian had these words of wisdom for a younger generation of athletes.

“It’s a lot easier said than done, but I’d just like to tell them they shouldn’t feel too much pressure,” Jin said. “Now that they’re at the Olympics, they should try to make sure they won’t have any regrets afterwards.”