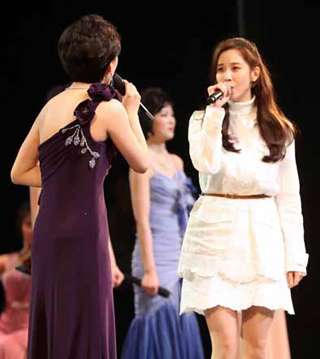 The collaboration between Seohyun of pop group Girls’ Generation and North Korea’s Samjiyon Orchestra was decided on the day of the performance.

During the orchestra’s performance held at the National Theater of Korea on Sunday evening, the singer made a surprise appearance and sang “Our Hope,” which expresses hopes for reunification, and the North Korean song “Until We Meet Again.”

At first, the orchestra refused to perform with a South Korean singer because there was not enough time to practice, but they were later persuaded by officials from the Blue House.

“Considering the age of the audience, we chose a singer that is known to many people, and Seohyun agreed to our suggestion,” added a spokesperson from the Blue House.

The singer’s agency told Yonhap News on Monday that the singer decided to join the performance just hours before she took the stage, adding that “there was no time for a rehearsal.”