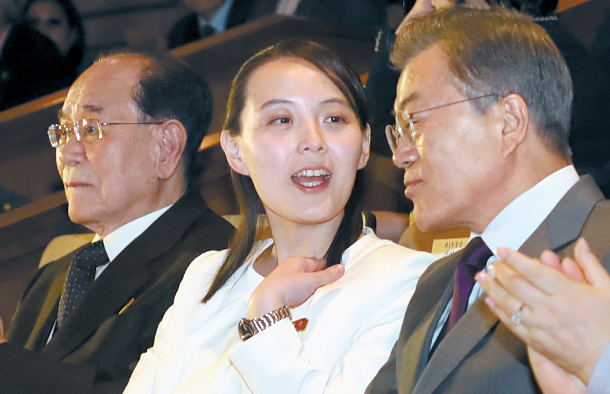 President Moon Jae-in, right, chats with Kim Yo-jong, sister of North Korean leader Kim Jong-un, as they watch a performance of the North’s Samjiyon Orchestra at the National Theater of Korea in central Seoul on Saturday. [YONHAP]

South Korean President Moon Jae-in was involved in a lot of diplomacy on the sidelines of the Winter Olympic Games, but concerns are being raised that he failed to achieve a balance in his dealing with North Korea and the United States.

It is rare for the president of a country hosting a multilateral event to spend so much time with a delegation from one country, as Moon did with North Korea’s, and so little with a major ally. Moon met with U.S. Vice President Mike Pence four times during his stay in Korea from Thursday to Saturday, but their meetings were conspicuously brief.

Moon hosted a reception and dinner for Pence on Thursday, and they had a brief encounter during the pre-opening reception on Friday for five minutes. Later in the evening, they attended the opening ceremony together, and on Saturday they watched women’s short-track speed skating game for 37 minutes.

Pence’s decision to skip the pre-opening reception on Friday sent a strong message, observers said. On Friday evening, Moon’s attempt to force a face-to-face encounter between Kim Yong-nam, North Korea’s visiting head of state, and Pence fell through after the U.S. vice president walked out of the event. Pence and Kim were supposed to sit across from each other for the reception and dinner.

Pence arrived at the event after it started and only stayed for five minutes. He shook hands with every foreign leader at the event except Kim and left.

“Because the Blue House seated Pence and Kim at the same table, the U.S. expressed discomfort,” said a diplomatic source. “I heard that the United States made a request that Kim’s seat be changed.”

The Blue House insisted on its original seating plan, and Pence skipped the reception. The Blue House said Pence notified it of his absence in advance, but speculation is high he walked out.

The United States made clear it didn’t want contact with the North. Joseph Yun, the U.S. State Department’s special representative for North Korea policy, who visited Korea on Feb. 5, told Korean government officials and scholars that Pence was not interested in any kind of North-U.S. contact. He said there was a zero percent possibility that a meaningful meeting would take place.

“The reception’s seating plan for the U.S. vice president is a serious diplomatic discourtesy, enough for Washington to take it as an intentional insult,” said a former senior diplomat.

When Pence visited the 2nd Fleet Command in Pyeongtaek on Friday, General Kim Byung-joo, deputy commander of the Korea-U.S. Combined Forces Command, participated. Other than that, no government official accompanied Pence to a public event during his stay in Korea.

Japanese Prime Minister Shinzo Abe was the only head of state among the four superpowers - the United States, China, Japan and Russia - to attend the opening ceremony, but he received off-hand treatment. Except for the opening ceremony, reception and dinner, Moon and Abe had only a one-hour summit on Friday.

The Blue House went as far as to make public the two leaders’ disagreement - even criticizing Abe for interfering in Korea’s domestic affairs.

“During the summit, Abe said it is important for Korea and the United States to carry out joint military exercises as planned, and Moon replied that it is undesirable for the prime minister to address Korea’s internal affairs,” a senior presidential aide said on Saturday. He voluntarily held an additional press briefing to make public that dispute.

Korea and the United States delayed annual joint military drills until after the Olympics and Paralympics. The events end on March 18, and Unification Minister Cho Myoung-gyon said the two countries delayed the exercises until March 25.

No announcement has been made on when they will take place, and speculation has grown that Seoul wants to delay them further in order to maintain the momentum of inter-Korean dialogue.

While the Blue House made public the altercation between Moon and Abe, Japan approached the issue with caution. A senior Japanese government official gave a briefing on Friday and was asked if the two leaders discussed Korea-U.S. joint military exercises during the summit. “The two countries agreed to increase pressure on the North to the maximum level,” he said. “I cannot elaborate any further.”

“There was no media report to confirm what happened. The Blue House went ahead and disclosed the facts first, so Japan could think it was an attempt to humiliate Abe,” a diplomatic source said. Although Seoul initially planned a meeting of Moon, Pence and Abe, they only had a brief photo opportunity.

Pence and Abe traveled in the same car to the Friday reception and sat next to each other at the opening ceremony, giving the impression that Seoul was left out of the usual trilateral coalition.