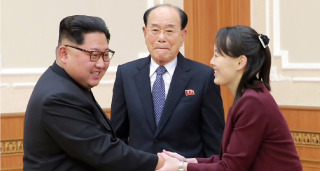 On Feb. 12, Kim Yo-jong, the first vice-director of the Central Committee of the Workers’ Party of North Korea, and Kim Yong-nam, president of the Presidium of the Supreme People’s Assembly of North Korea, entered Kim Jong-un’s office upon returning from Pyeongchang. The following is how I imagine the conversation went.

Kim Yong-nam: Dear leader, the visit was a great success. We were warmly welcomed by South Korea.

Kim Jong-un: Of course, South Koreans should thank us for fanning the dying flames of the Olympics. Yo-jong, you did very well in delivering my message.

Kim Yo-jong: As you said, I claimed that I was a special envoy. South Korea will probably send a special envoy as well.
Kim Yong-nam: In retrospect, it was a divine move to declare the completion of our nuclear armament last year.

Kim Jong-un: It was not a divine move, but a prediction based on scientific study of the situation. Now that we successfully secured our self-defense capabilities with nuclear weapons, I suggested it is about time to pursue reconciliation and cooperation. With the PyeongChang Winter Olympics at stake, South Korea cannot be uncooperative and insist on denuclearization. Yo-jong, did the South Korean president and ministers really mention denuclearization?

Kim Yo-jong: You were right, brother. But U.S. Vice President Mike Pence ignored us. I am worried that the United States is getting ready for war.

Kim Jong-un: Don’t worry. We already put the inter-Korean summit card on the table. Trump cannot attack someone who wants to talk. Let’s wait and see. Opinion in South Korea will be divided, and China will support the talks. In the end, sanctions will weaken.

Kim Yong-nam: But will South Korea accept talks? The United States will interfere.

Kim Jong-un: Even if the meeting does not happen, we have nothing to lose. Who is taking responsibility? It will be concluded that Pyongyang wants to talk without conditions, but South Korea refused because of the United States. Then we can go about our way. North Korea will have the justification to reinforce its self-defense capacity because the United States and South Korea ignored the proposal to talk and adhere to hostile policies.

They may think that North Korea won’t test nuclear weapons or missiles after declaring completion of the nuclear program, but they are mistaken. The program can always be improved. We need to show our capability when necessary, until they believe us. If they don’t like it, they will accept the meeting. Talking about PyeongChang makes me want to ski. Let’s go to Wonsan, have some fun and wait for Seoul’s response.