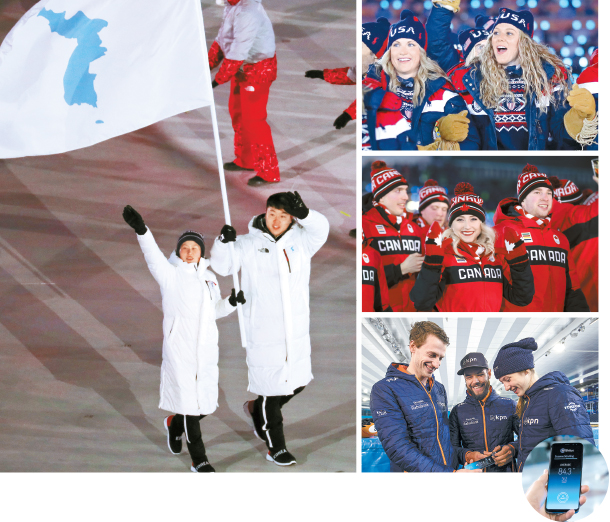 When Chloe Kim won gold in the halfpipe event on Monday, sewn into her jacket was a fabric patch with Korean translations of 12 simple English sentences.

For Kim, a Korean-American, the patch may have served little use, but for the rest of Team USA, the patches help them communicate with Koreans should athletes find themselves lost without a translator. They include sentences like “Which way to the Olympic Village?” as well as information like won-dollar conversions and Celsius to Fahrenheit calculations.

The patches are unique to the parkas of the American snowboarding team. Not just every country but every team is responsible for creating custom uniforms for their athletes, and their esoteric features have been turning heads at the Games. New Zealand snowboarder Zoi Sadowski-Synnott was spotlighted by local media Sunday after she was seen wearing a jacket with “New Zealand” printed in Korean on her right sleeve.

Uniforms are not a core part of the Games, but their designs representing each country offer a bit of color to the event. At the opening ceremony, when North and South Korean athletes walked into the stadium as one team, the uniform was a white coat with a palm-sized patch of the Korean Peninsula flag. The abrupt decision for both countries to walk as one required last-minute changes that would strike any South Korean motifs from the uniform.

The small South Korean flag on the coat’s upper right chest was replaced with the unification flag and the logo "Team Korea" written on one sleeve in large calligraphy was erased as well. Instead, the joint team is competing as “Corea.” The lyrics of South Korea’s national anthem, printed inside the coat, were also removed.

Apart from aesthetics, the science behind some uniforms is also notable, especially at the Winter Olympics, where what you wear can mean a difference of decimal points that decide races on ice and snow.

Skating is one field where the outfit’s fabric can play a significant role in an athlete’s performance. The crucial element is the material’s ability to reduce air resistance while ensuring flexibility for fast movement during a race.

Samsung Electronics upgraded the Dutch speed skating team’s uniforms with tracking technology for purposes of training. Each custom-made suit comes with five sensors that measure the real-time performance of the skater, including useful information like how much they are crouching on the ice. Coaches can then send a signal to the skater, who receives a vibration on the wrist to indicate a correction is needed.

Another factor to consider when making a uniform is weather. Pyeongchang’s biting winds have been strong enough to postpone some events. The average temperature is estimated to be around negative 5 degrees Celsius (23 Fahrenheit). The previous two Winter Olympics in Sochi and Vancouver frequently saw temperatures at around 10 degrees Celsius.

Team USA’s uniforms made by Ralph Lauren are significantly warmer this year. Their jacket was made of fabric with ink that heats up using a slim battery pack that can last up to 11 hours. Athletes can activate the system with a button and control the degree of warmth.

Canada’s alpine skiers also have heated pants powered by batteries to defend against strong winds on the slopes.

The opening ceremony was a sort of winter season fashion show on its own, with spectators around the world able to glean the sartorial choices of 92 countries. For power fashion brands, the Olympics represent not just a competition of sport but also an occasion to boost their brand power as an official provider to national teams.

Ralph Lauren is in charge of Team USA for a sixth time. Its uniform includes three-color sweaters of red, white and blue. For Team Italy, Giorgio Armani printed the Italian national anthem inside the uniform jacket, and among other renowned fashion brands dressing their athletes are Lacoste for France, The Hudson’s Bay Company for Canada and H&M for Sweden.

Korea’s official uniform provider is The North Face, though the uniform was made by Korean designers at Youngone Outdoor, a local sportswear manufacturer that has sole brand rights to use The North Face’s name on its products.

Like previous uniforms for Korea’s winter team, it drew inspiration from South Korea’s national flag with white as the dominant color and details in red and blue.

“We tried to pull out the ‘soft’ side of the Korean flag and used small motifs from the curves and colors of the Taegeuk,” a North Face spokesman said, referring to the red and blue circle in the middle of the flag.