From Yonsei graduate to doctor for Team USA

From Yonsei graduate to doctor for Team USA 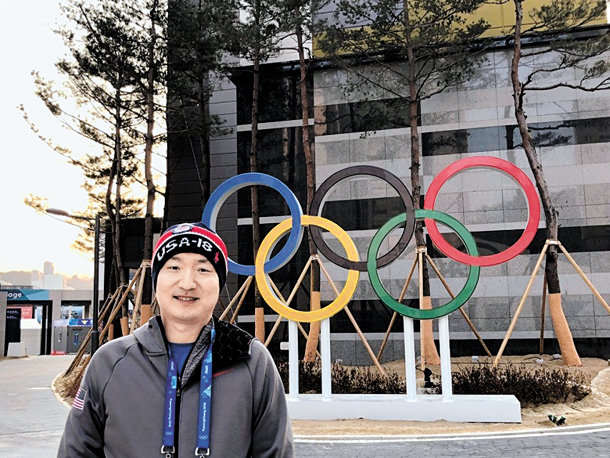 Eugene Yousik Roh, a Korea-born medical doctor at Stanford University School of Medicine, came to Korea as a physician for Team USA during the 2018 PyeongChang Winter Olympics.

Roh, a graduate of Yonsei University College of Medicine and Stanford Medical School, has been working for Stanford University School of Medicine since 2010. He earned a reputation as an authority on non-operative biologic treatments and sports injuries. He has been working as a team physician for varsity players at the Stanford Athletic Department since 2013 and was given Best Teaching Award from Stanford Physical Medicine and Rehabilitation Department in 2016. Currently, he is taking care of 244 U.S. Olympians at PyeongChang.

Roh became interested in the Olympic Games during the 1988 Seoul Summer Olympics. He was a middle school student in Seoul at that time and visited the stadium with his friends.

“It was the best memory in my life,” he says, “I always wanted to work at the Olympics after I became a doctor.”

He expressed a strong interest in working as a medical staff member for the 2018 Olympics after he heard Pyeongchang, Gangwon, was selected as its host. He visited Korea to participate at a medical conference and met Bill Moreau, managing director of Sports Medicine Division of United States Olympic Committee (USOC), and conveyed his interest to Moreau. Later, Moreau invited him to USOC’s Olympic Training Center at Colorado Springs, Colorado. He voluntarily decided to treat players after visiting the training center.

Team USA needed a specialist in non-operative biological treatment, and Roh was just the man for the job.

“The team need and my specialty matched perfectly,” Roh says. “It is a great honor to join the team for this 2018 Olympics.”

Coincidently, the South Korean team at the PyeongChang Olympics asked Roh to be an ice hockey venue medical officer, but after consideration, Roh decided to join Team USA.

Nevertheless, he works as a middleman between Team USA and Team Corea’s medical teams.

He prepared Team USA’s medical facility on the first floor of the Team USA athletes’ residential building in the Gangneung athletes’ village, where his focus will mainly be ice sports, such as ice hockey and skating events. “I will be on standby 24/7,” he says, “in order to deal with all kinds of emergencies.”

Roh adds, “For me, treating players to be in the best condition is more important than players’ results. It is my duty to heal players perfectly. Winning is a bonus. It’s a great pleasure to take care of great athletes, who have huge passion and great self-control.”