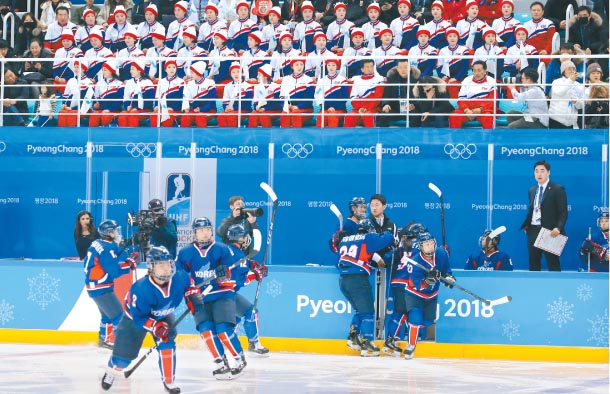 Members of the inter-Korean women’s ice hockey team face Japan at the Kwandong Hockey Centre in Gangneung, Gangwon on Wednesday, with the North Korean cheerleading squad behind them. Japan defeated the inter-Korean team 4-1. The joint team scored its first goal of the Winter Olympics during the game. [YONHAP]

According to the Unification Ministry, 2.86 billion won ($2.65 million) will be spent from the Inter-Korean Cooperation Fund, the largest amount approved by far to be spent from the endowment, which was established in 1991 to support economic, social and cultural exchanges between the two Koreas.

The amount does not include the costs of a three-day visit by a high-level delegation from Pyongyang. The delegation, including Kim Yo-jong, younger sister of the North Korean leader Kim Jong-un, and Kim Yong-nam, the country’s ceremonial head of state, visited the South from last Friday through Sunday. They stayed at the five-star Sheraton Grand Walkerhill Hotel and received VIP treatment including a presidential luncheon hosted at the Blue House.

“We are categorizing that visit as inter-Korean talks,” said Unification Ministry Spokesman Baik Tae-hyun. “It was financed with the budget earmarked for inter-Korean talks.” He refused to disclose how much the visit cost.

According to the ministry, the 2.86 billion won spending plan will cover the North Korean cheerleaders, taekwondo demonstration team, journalists and Samjiyon Orchestra. The South had agreed to the North during January talks to fund their trips, and the spending was approved based on a law governing the Inter-Korean Cooperation Fund, the ministry said.

In addition to the 2.86 billion won, the Unification Ministry already approved money for the North Korean advance teams’ visits last month. The ministry approved 27 million won on Jan. 26 to cover the trip of Hyon Song-wol, leader of North Korea’s Samjiyon Orchestra, on Jan. 21 and 22, and an advance team of athletes who visited the South from Jan. 25 to 27.

More money will later be approved and spent to accommodate 150 North Korean athletes who will participate in the PyeongChang Winter Paralympic Games from March 9 to 18.

At the time, the ministry first approved a spending plan of 2.12 billion won and ended up spending 1.36 billion won.

Asked about the unusually high amount, Baik said Olympic Games tickets are expensive. “We allocated about 1 billion won alone for the tickets,” he said. Another 1.2 billion won was for lodging and meals and 100 million won for transportation.

Baik said the money will directly be paid to the Organizing Committee of the PyeongChang Winter Olympics, Korean Sport and Olympic Committee and World Taekwondo Federation. “Because we will settle the bills later, the actual spending will be smaller than what we approved,” he said.

Meanwhile, the government is being criticized for failing to make proper preparations or giving overly special treatment to the North Korean visitors.

When 32 athletes arrived at Yangyang International Airport on Feb. 1, the immigration office did not have enough data to confirm their identities, according to sources. Immigrations and Customs officials reportedly took photos of the athletes’ faces with their cell phones and confirmed the identities with the National Intelligence Service and the Unification Ministry.

“When the people from the two Koreas visit each other, personal information including photos, names, birth dates and titles are sent in advance via fax, but this time, we received the information after the North Koreans’ arrivals,” an official said.

Critics also said the government gave unreasonably special treatment to the North. Immigration checks were minimized when Hyon entered the South on Jan. 21, and an official said baggage checks were mere formalities despite international sanctions currently in place on the North.

“Hyon and Kwon Hyok-bong, director of the Arts and Performance Bureau in North Korea’s Culture Ministry, were given special treatment, but it was in reciprocity because South Korean officials are treated specially in the North,” said a Unification Ministry official. “The other visitors went through the ordinary immigration process.”

The North actually objected to some special treatment. When North Korean sports officials arrived at the immigration and customs office at Dorasan Station of the inter-Korean Gyeongui Line on Jan. 25, the South Korean officials escorted them directly to a VIP lounge, skipping the required immigration checks. The North Koreans insisted on going through the official entry process.

“Because of the frozen relations over the past nine years, the Unification Ministry and other officials handling North Korea affairs apparently became rusty,” a North Korea scholar said. “I wonder if they are ready and capable of handling rapidly resuming inter-Korean exchanges.”

Meanwhile, Vice Unification Minister Chun Hae-sung is scheduled to have separate meetings with Chinese Ambassador to Korea Qiu Guohong and Acting U.S. Ambassador Marc Knapper on Wednesday to brief them on the North Korean delegation’s visit.